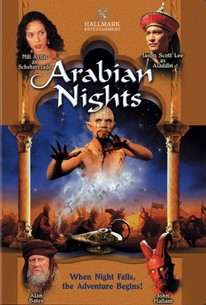 When Sultan Said discovers his wife locked in a passionate embrace with his only brother, he flings his sword at the prince and accidentally murders his adulterous queen. Tortured by his wife's ghost, the maniacal and cowardly sultan must marry another to save his kingdom, but to avoid future matrimonial disgrace he plans to have her executed the morning after the wedding. Fortunately for him, Scheherezade, the grand vicar's daughter played by the lovely Mili Avital, jumps at the challenge and the chance to marry her childhood love. A master storyteller, the newly crowned sultana escapes death night after night with her mesmerizing tales of Ali Baba and the Forty Thieves, Aladdin and his Magic Lamp, countless warriors, supernatural duels, and ferocious genies.

Arabian Nights was lavish entertainment, with some good actors, mostly lost in whiskers, excellent effects like the flying carpet, and sly lines woven in to amuse the adults.

They should have adapted, instead of Arabian Nights, a children's book that derives from (while modernizing) the same classic text -- Salman Rushdie's Haroun and the Sea of Stories.

A fresh, but long, take on the classic stories.

Well done TV mini Series, not many things I can gripe about, it didn't feel long to me. If you like Fantasy films, it's a good watch.