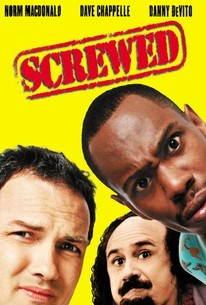 Critics Consensus: Despite having real comics in the cast, this tedious and painfully unfunny movie desperately needs a screenplay.

Critic Consensus: Despite having real comics in the cast, this tedious and painfully unfunny movie desperately needs a screenplay.

Scott Alexander and Larry Karaszewski, the screenwriting team who penned Ed Wood, The People vs. Larry Flynt, and Man on the Moon, made their debut as directors with this broad comedy. Norm MacDonald stars as a chauffeur who decides to get revenge on his wealthy boss by kidnapping her dog. Produced under the titles Pittsburgh, Ballbusted, and Foolproof, Screwed also stars Danny De Vito, Dave Chappelle, Sherman Helmsley, Elaine Stritch, and Sarah Silverman.

Lochlyn Munro
as Off. Richardsen

Ben Derrick
as Cop at Pile Up

A shrill, stupid, brickbat-blatant piece of hackwork that practically sweats to be 'commercial.'

Danny DeVito is the only cast member who succeeds in making something out of the movie's nothing of a screenplay.

If this is how they want to squander a hard-earned opportunity, they should keep their day jobs.

much better than i thought

Pitiful excuse for a film.

Doesn't even have the decency to be horrifyingly funny.

The comedy throughout Screwed is as luscious as a cake baked in honor of Virginia's Crock's thirtieth birthday.

Once again, 'gross' does not automatically equal 'funny'.

What sort of filmmakers could possibly think it a good idea to title their picture Screwed?

Screwed is a low-brow dognapping caper comedy that had all the early warning signs of a real stinker.

Nothing great, but works because of clever casting and funny material.

No one would survive a lava lamp to the face.