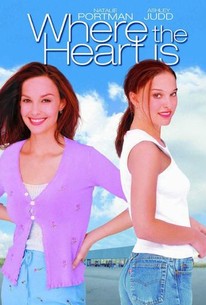 Where the Heart Is Photos

Pregnant 17-year-old Novalee Nation (Natalie Portman) runs away from her Tennessee home toward the bright lights of California, accompanied by her boyfriend, Willy Jack Pickens (Dylan Bruno). But Willy gets cold feet and abandons her at a Walmart in Sequoyah, OK. Novalee's life savings amount to $5.55, so she moves into the Walmart, sleeping there at night and venturing out during the day. With the help of the eccentric Sister Husband (Stockard Channing), and Lexie Coop (Ashley Judd), a nurses' aide, Novalee tries to get her life in order for the sake of her expected child, Americus Nation. Based on a novel by Billie Letts, Where the Heart Is also features Keith David, Joan Cusack, Richard Nance, and Heather Kafka. ~ Mark Deming, Rovi

Gabriel Folse
as Policeman No. 2

Cheyenne Rushing
as Co-Ed
View All

News & Interviews for Where the Heart Is

View All Where the Heart Is News

Critic Reviews for Where the Heart Is

Not possessing much in the way of a character arc, saints are boring to watch and impossible to act.

So much plot is crammed in, it's like a feature-length soap.

Where the Heart Is has a screenplay like that, zigging and zagging and wildly careening from one melodramatic development to the next.

A chick flick that's as yummy as eating bon-bons.

... a great big ol' commercial for the Wal-Mart

The script, based on a novel by Billie Lett, is sprinkled with phrases meant to be poignant and funny, but sound like repackaged cliches.

This is as irritating as chick flicks come and it's a real disappointment since Portman's talents are totally wasted.

Unfortunately, the spirited performances (notably Stockard Channing as the benevolent Sister Husband) buckle under the weight of the implausibly overloaded script.

Audience Reviews for Where the Heart Is

I was close to selling this DVD, but then decided to give it one last gander before goodbye. I'm glad I did cuz this is really quite a sweet movie about redemption and the kindness of strangers. It's Classic Natalie. She's a bit vegan and weird now, but in her salad days (ironic?), she could really bare her heart in her performances. I also dig James Frain (Villefort from "The Count of Monte Cristo) as the lovelorn Forney.

A feel-good movie where a pretty young pregnant girl (Natalie Portman) gets left at a Walmart in Oklahoma. During the movie, Natalie has to figure out how to have her baby, establish a support network and find a loving partner.

An all time favourite - still as good 11 years later as the first time I watched it. This really is the ultimate girl movie - good story to it and great cast. This is one of those rare movies where the movie is better than the book. After seeing this, i got it, and I was really bored by it. This movie really bought the story to life and the people they chose to play the characters are perfect. The only thing that constantly bugs me is the artwork - why has Ashley Judd got dark hair when she is blonde in this!!!

Where the Heart Is Quotes