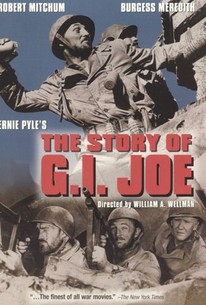 The Story of G.I. Joe Photos

The Story of G.I. Joe was based on the columns of Scripps-Howard war correspondent Ernie Pyle (Burgess Meredith). Though already past 40, Pyle insists upon marching along with an Army infantry unit during the Italian campaign. He befriends several of the soldiers, including commanding officer Lt. Walker (Robert Mitchum in his breakthrough role), family man Sgt. Warnicki (Freddie Steele) and would-be romeo Private Dondaro (Wally Cassell). The "plot" of the film is moved forward by the progression of the war itself; basically, however, G.I. Joe is an anecdotal collection of comic, dramatic and tragic vignettes. Some of the more memorable moments include: Sgt. Warnicki's ongoing efforts to listen to a recording of his infant son's voice; Walker's casual reactions to his many field promotions; and a wedding ceremony which is "punctuated" by an air raid. Many infantry veterans consider The Story of GI Joe to be the single most realistic Hollywood war film of the 1940s, eschewing big stars, phony heroics and overblown battle sequences in favor of the everyday trials and tribulations of the humble foot soldier. Ironically, Pyle, who acted as technical adviser when he wasn't busy on the front, was killed by an enemy sniper shortly before the release of this film. ~ Hal Erickson, Rovi

Dick Rich
as Sergeant at Showers

Don Whitehead
as Himself

George Lait
as Himself

Chris Cunningham
as Himself

Hal Boyle
as Himself

Bob Landry
as Himself

Lucien Hubbard
as Himself

Clete Roberts
as Himself

Robert Reuben
as Himself
View All

Critic Reviews for The Story of G.I. Joe

Though it's considered a seminal war film, The Story of G.I. Joe hasn't aged particularly well, focusing on generic dogfaces instead of legendary correspondent Ernie Pyle.

A desolating masterpiece from beginning to end, like any war is. [Full review in Spanish]

It's not an anti-war movie, but something even rarer; a war-agnostic movie.

One of the most realistic and popular WWII movies made by Hollywood, for which star Robert Mitchum received his sole Oscar nomination.

One of the better war films.

Audience Reviews for The Story of G.I. Joe

There are no featured audience reviews yet. Click the link below to see what others say about The Story of G.I. Joe!

The Story of G.I. Joe Quotes