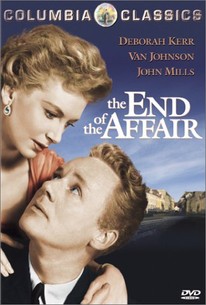 Recently freed from his MGM contract, Van Johnson headed to England to star in a series of pictures, the first of which was The End of the Affair. Adapted by Lenore Coffee from the novel by Graham Greene, the film casts Johnson as Maurice Bendrix, the clandestine lover of married Briton Sarah Miles (Deborah Kerr). When Maurice disappears during the London blitz, Sarah feels responsible; perhaps if she hadn't been cheating on her husband Henry (Peter Cushing), Maurice might never have been placed in harm's way. She gets down on her knees and prays, promising to return to her husband and give up Maurice if her lover's life is spared. The film's title rather gives the game away. The best performance is delivered by John Mills, as an affable private detective hired by Henry Miles to check up on Sarah's whereabouts. ~ Hal Erickson, Rovi

Critic Reviews for The End of the Affair

Worthy in intent, but often dull in execution...A priceless vignette by John Mills as an English private eye is the best thing in the picture.

This older B&W version of the recent remake puts less stress on the lust and more on the inner conflict the two lovers are having.

Audience Reviews for The End of the Affair

There are no featured audience reviews yet. Click the link below to see what others say about The End of the Affair!

The End of the Affair Quotes