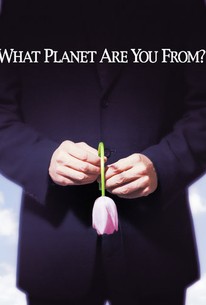 Critics Consensus: Though What Planet Are You From? has some laughs, it's too inconsistent and bland for critics to give it their recommendations.

Critics Consensus: Though What Planet Are You From? has some laughs, it's too inconsistent and bland for critics to give it their recommendations.

Critic Consensus: Though What Planet Are You From? has some laughs, it's too inconsistent and bland for critics to give it their recommendations.

What Planet Are You From? Photos

Garry Shandling makes his big-screen debut as a leading man in this sci-fi romantic comedy. Harold (Shandling) is an alien from another galaxy sent to Earth on a vital mission: in order to ensure that his civilization will prevail, Harold must impregnate an Earth woman. But he discovers that this is more easily said than done, as he quickly gets a crash course in the arcane rituals of the human courtship process. What's worse, just when Harold thinks he's making progress in Earthbound seduction, he discovers that the males of his planet don't physically interface properly with women on Earth, so he is issued a variety of bizarre gadgets to complete his assignment. Mike Nichols directed What Planet Are You From?, which also features a top-notch supporting cast, including Annette Bening, John Goodman, Ben Kingsley, and Camryn Manheim.

Phill Lewis
as Other MD

News & Interviews for What Planet Are You From?

View All What Planet Are You From? News

Critic Reviews for What Planet Are You From?

Shandling and director Mike Nichols find a funny new way of packaging the old truth in What Planet Are You From?

Bening, even in a formula role like this one, is so lovable she actually makes you believe that she'd melt the resolve of a technocratic space visitor.

A testicle-tweaking satire on men trying to get in touch with feelings most of them didn't know they had.

Easily the funniest movie of the year.

Shandling's a bland black hole that obliterates whatever trace of energy or inspiration mustered by this unwieldy film.

It all seems to suffer from jet lag and a lame script and a bad case of crassness.

The movie offers not one shred of insight, comic or otherwise, into the eternal conflict between the sexes.

...what are Mike Nichols and Annette Bening doing here?

There are some amusing cameos and small parts and a number of very good one liners, but by god, this is really a shame.

Lightweight material to be sure, but it's fun just the same.

Audience Reviews for What Planet Are You From?

i liked this when i first watched it. It has an impressive cast and a funny concept, it gets boring after a while

I watched this movie really wasted, so I'm not sure if this review is really all that fair. From what I remember there are some great, funny scenes from a really talented cast. Kinnear has some really funny asshole moments and John Goodman seems to make anything work. Annette Bening is the definition of a cougar and really brings a real levity to a lot of really stupid situations. The film is cute and inventive at the opening, but then gets bogged down by some really lame stuff. Shandling is funny, but there is this whole running away from the bad guys scene which really turned the movie into a stupid chase film in an already reaching plot. Either way, not terrible and a good way to pass the time while you are waiting for everyone to pass out so you can fall asleep on the couch.

I can't believe Mike "The Graduate" Nichols directed THIS.

Weird flick with lots of Garry Shandling clones. I didn't find this music too fun. I didn't quite get it.

What Planet Are You From? Quotes