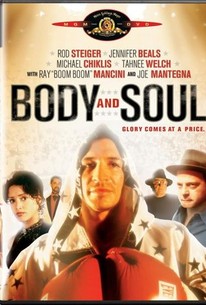 Former boxing great Ray "Boom Boom" Mancini brings years of experience in the ring to his role in this drama. Charlie (Mancini) is an up-and-coming boxer who decides he needs to move to the big city if he wants to be a contender. With his best friend and manager Tiny (Michael Chiklis) in tow, Charlie heads to Reno; en route, Charlie falls for Gina (Jennifer Beals), an attractive hitchhiker, though Tiny is certain she's up to no good. In Reno, Charlie's skills as a fighter attract the attention of Johnny (Rod Steiger), a veteran trainer who thinks Charlie has what it takes to be a champ. Johnny is able to arrange a meeting for Charlie and Tiny with Dumas (Joe Mantegna), a boxing promoter who controls the fight game in Reno. Charlie soon learns that fame and fortune could be his for the asking, but is he willing to give up his principles and betray the people he cares about in exchange for a shot at the big time? Body and Soul is a loose adaptation of the 1947 classic starring John Garfield, though beyond the fact the lead characters are boxers named Charlie, the two films have little in common.

Critic Reviews for Body and Soul

There are no critic reviews yet for Body and Soul. Keep checking Rotten Tomatoes for updates!

There are no featured reviews for Body and Soul at this time.