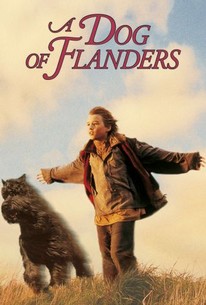 A Dog of Flanders Photos

The fifth film version of the classic 19th century children's tale by Ouida (aka Marie-Louise de la Ramée), A Dog of Flanders tells the story of young Nello (Jesse James), a boy growing up with his grandfather Jehan (Jack Warden) after the death of his parents. Although Jehan has little in the way of material wealth, he loves his grandson and tries to encourage him in his pursuits; Nello also has the support of his best friend Aloise (Madyline Sweeten) and the love of his faithful dog, Patrasche. Following in the footsteps of his late mother, Nello has an interest in art and has taken up drawing. His work catches the eye of Michel La Grande (Jon Voight), a famous artist who lives in town and offers Nello encouragement. However, as he grows older, the friendship between Nello (now played by Jeremy James Kissner) and Aloise (now played by Farren Monet) is jeopardized because her family feels that a lower-class boy like Nello is not a fit companion for a respectable girl like their daughter. Hoping to earn money and advance his career as an artist, Nello enters a competition for painters on the advice and coaching of La Grande. However, the prize goes to a less skilled but more socially prominent art student. Discouraged, Nello and Patrasche leave home for a journey that will teach them and those around them an important lesson about friendship. A Dog of Flanders represents a change of pace for director Kevin Brodie, whose previous credits include the college comedy Delta Pi and the thriller Treacherous.

Bruce McGill
as William The Blacksmith

Jenny Tanghe
as Gertrude
View All

Critic Reviews for A Dog of Flanders

The film is one that families will enjoy discovering and experiencing together.

Horrible adaptation of a wonderful story. Rent the anime version, instead.

enough spirit and the right attitude, but the rest of the essential elements of a successful movie just are not here.

One is tempted on such a promising but cliched movie to reduce it to a one-phrase review. The one for this picture would be: Needs more dog.

Step into the darkened theater and the familiar smell may not hit you immediately. Watch your step, though, because A Dog of Flanders is nothing but cinematic doggy poo.

Audience Reviews for A Dog of Flanders

There are no featured audience reviews yet. Click the link below to see what others say about A Dog of Flanders!

A Dog of Flanders Quotes