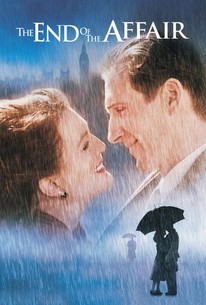 The End of the Affair Photos

On a rainy London night in 1946, novelist Maurice Bendrix has a chance meeting with Henry Miles, husband of his ex-mistress Sarah, who abruptly ended their affair two years before. Bendrix's obsession with Sarah is rekindled; he succumbs to his own jealousy and arranges to have her followed. As the investigation progresses, we learn the reason for their separation. During a bombing raid, Sarah struck a bargain with God to sacrifice their relationship-in exchange for Bendrix's life. When Bendrix reappears in her life, Sarah realizes that her promise to God has become impossible for her to keep. She is placed in a spiritual dilemma as she struggles with her continuing love for her former lover in the face of the realization that she is fatally ill.

Cyril Shaps
as Waiter
View All

Critic Reviews for The End of the Affair

The characters are so unsympathetic, the adulterous love affair at the heart of the story so joyless, and the three main performances so mannered that it's hard to feel anything but disappointment and boredom.

If the movie were not so downbeat and its literary pedigree so distinguished, the resolution would be soap opera.

For all its obvious psychoanalytic implications, [Jordan's] wacky romantic triangle lost me long before it crawled to its spiritualist conclusion.

This is the kind of movie in which even the sex scenes are soulless.

Guaranteed to be mistaken for a first-rate picture.

The whole thing is beyond purple and yet so careful and reverent you can't even enjoy it as camp.

But the biggest flaw in Neil Jordan's movie is how severely it contradicts the core of Graham Greene's novel.... What a sad and melancholy piece of work.

Writer/director Neil Jordan takes the right approach to the material. Instead of trying to spruce it up, he simply moves in closer.

Neil Jordan's film captures an unyielding sense, even almost to a fault, of romantic realism and its often underlying sadness.

a demanding, thought-provoking film ...built around a theme many will find difficult to accept, that miracles can happen to perfectly ordinary, non-religious people.

Can anyone fail to recognize this as a fundamental betrayal of the author’s creative vision?

Audience Reviews for The End of the Affair

Based on a novel by Graham Greene, this is a romantic drama set during World War II that is in many ways a standard love triangle involving a guy, his best friend, and the best friend's wife. There's lies, deception, and a torrid affair. Some of this is compelling, but overall the basic plot isn't all that unique or interesting, and this isn't the best variation on a theme. However, the period details, costumes, sets, etc are well done, and the acting is what ultimately makes this a good film worth watching. Stephen Rea is good as the nervous, henecked husband, Ralph Fiennes is great as the stuffy 40s intellectual madly in love with his friend's wife, and Julianne Moore is sublime as the wife, giving a very nuanced performance. It's also a plus that this is one of several films where she shows her willingness to do love scenes and show the goods, especially a memorabele scene where bombs literally go off during the heat of the moment. All in all, this is a fine enough period drama, even if it's not the most compelling or memorable. Neil jordan knows how to stage these things, and the acting is ultiamtely what makes it worth a recommendation.

Or as I like to call this movie; GROPE. lol I absolutely adore RALPH FIENNES. But i just didnt really find myself enjoying this movie that much.. Julianne Moores character seems almost too self-pitying and whinny as some points. In this movie I actually thought that the actor that stood out the most for me was Stephen Rea. He was quite good. Never bitter or hating as you would expect a man in his position would be. Very well acted. All in all i dont really think I would watch this movie again, not even for Ralph. Near the end when we find out WHY Moores Character broke of the relationship, i just thought it was rediculous!! Very unbelieveable...

Terribly bland and brash. The film lacks elegant subtlety so just about every theme is repeated out loud and then again in Fiennes' narration which is simply laughable. Why Jordan continues to cast Stephen Rea is anyones guess. He is either a dull mess, like he is here, or an over the top laughing stock. The narrative manages to strip the film of any suspense or surprises and the religious aspects come across as desperate. Hart and Isaacs give two brilliant turns as you would expect but they are never fully developed upon. A melodramatic, emotionless mess. I'll give it points for the score.

The End of the Affair Quotes