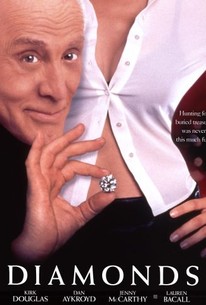 A elderly man and his estranged son search for treasure and try to repair their relationship in this bittersweet comedy. Harry Agensky (Kirk Douglas) is a one-time welterweight boxing champion who lives in Canada with his son Moses (Kurt Fuller). Harry's other son, Lance (Dan Aykroyd), feels that his father never really cared about his dreams and ambitions, and now Lance has little affection for his Dad. However, Lance's relationship with his teenage son Michael (Corbin Allred) is not faring much better. Lonely since the death of his wife and infirm due to a stroke, Harry wants to retire to a ranch in Northern Canada, but he can't afford the property. Lance invites Harry along for a skiing trip with Michael; Harry agrees, but at the last minute he talks them into going to Nevada instead. Harry claims he threw a fight years ago and was paid off in a cache of diamonds that he hid somewhere in Vegas; if he can find the gems, he'll be able to buy the ranch. Lance is dubious, but he gives in to Harry's determination and the three head for Nevada, hoping to find both the diamonds and some common ground. Diamonds was Kirk Douglas's first film after a life-threatening stroke in 1997; Lauren Bacall appears in a small role as a madam in a Nevada brothel, marking her first appearance onscreen with Douglas since Young Man with a Horn in 1950.

Karen Mal
as Bev
View All

Inappropriate for audiences of all ages.

Douglas, always one of Hollywood's most vigorous actors, still commands the screen as Harry.

Kirk Douglas is still the champ.

Diamonds feels like it was conceived as a showcase for Douglas at 83, and so it is, but what a dreary story and unconvincing characters he has been surrounded with.

Diamonds can be proud of its achievement as the ultimate primer on elderly embarrassments and the best ways to exploit them.

It'll be hard not to check your watch every five minutes.

Douglas struggles honorably with his stoke-impaired speech and a shoddy story.

I have to admit I shed some sentimental tears during the movie, so it's not really very bad at all, but it could have used a script polish.

Corny dialogue and a contrived plot.

The tag line for Diamonds promises that 'searching for buried treasure was never this much fun.' Replace 'much fun' with 'dull' and that marketing slogan suddenly gains a lot of truth.

There are no featured audience reviews yet. Click the link below to see what others say about Diamonds!