Anna and the King 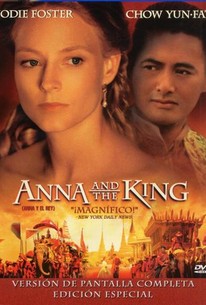 Critics Consensus: Beautiful cinematography can't prevent Anna and the King from being boring and overly lengthy.

Critics Consensus: Beautiful cinematography can't prevent Anna and the King from being boring and overly lengthy.

Critic Consensus: Beautiful cinematography can't prevent Anna and the King from being boring and overly lengthy.

Anna and the King Videos

Anna and the King Photos

The true story of Anna Leonowens' experiences as a governess to the children of an eccentric Asian king has been adapted into a book of memoirs, a biography, a stage play called Anna and the King of Siam -- which was adapted into a 1946 film, a stage musical called The King and I -- made into both the live-action The King and I (1956)) and the animated The King and I (1999) feature films, and a short-lived 1972 TV series. Now the story is brought to the screen yet again, as Jodie Foster stars as Leonowens, hired by the king of Thailand (Chow Yun-Fat) in the 19th century to help care for his children. The king wants the best for his children, but Anna soon discovers that he is a strong-willed but quixotic leader, and her stay in Thailand becomes a struggle for power with romantic overtones, as they decide who will have authority over the royal youngsters. Anna and the King was directed by Andy Tennant, best known for his 1998 variation on the Cinderella story, Ever After. ~ Mark Deming, Rovi

Syed Alwi
as The Kralahome

Yusof B. Mohd Kassim
as Pitak

Aimi Aziz
as Lady of Court No. 1

Ellie Suriatry Omar
as Lady of Court No. 2

Tina Lee Siew Ting
as Lady of Court No. 3

Wong Chiu Ling
as Lady of Court No. 4

Zaridah Abdul Malik
as Lady of Court No. 5

Ahmad Mazlan
as Scout No. 1

Mohd Razib Saliman
as Scout No. 2

News & Interviews for Anna and the King

View All Anna and the King News

Critic Reviews for Anna and the King

Anna and the King is a remarkable achievement for Andy Tennant... He has made full use of the magnificent sets, costumes and spectacle while never neglecting the human relationship that makes the Anna-King saga so enduring.

It is pleasant, occasionally amusing -- and often dull.

Lush, beautifully shot, but quite draggy.

What's missing, however, is the one element that would have made it work -- credible, developing romantic tension between Anna and the king.

Serve as a slap in the face.

Filmed in Malaysia, with an elaborate reconstruction of the original royal palace, it's gorgeous enough to make you want to visit your travel agent right after closing credits.

Intense, mature version of The King and I.

Handsome and well-appointed ... but still one of the most boring films in recent memory.

A grand retelling of an iconic story.

The third major screen version of the story, has much to recommend it.

A deliberate retelling of 'The King and I' without the musical interludes. 'Anna and the King' is a slow, but ultimately rewarding period drama.

Audience Reviews for Anna and the King

The plot wasn't focused enough, trying to fit in too many themes and coming up short and shallow on every one. Wonderful cinematography though, with beautiful locations.

The king of Siam employs a British woman to teach his more than fifty children. This is lush costume drama, full of all the pomp and circumstance and majestic panning shots that you would expect. Occasionally the cinematography actually reminded me of The English Patient which is no small compliment. And Jodie Foster is a premier actress, especially when it comes to playing vulnerability and her character's attempts at overcoming vulnerability. She has that pout and fearful but determined look in her eye on full display in many of her scenes. However, I think the film is quite muddled and uneven. First, there is a great deal of talk about colonization. After all, one of the principal conflicts in the film is internal to the king's educative mission: how does he push for modernization when the definition of modernity is to be like his oppressors? How does he resolve the contradiction of tradition and modernity? These are compelling questions, both academically and cinematically. But they are not adequately explored. For example, Anna travels with two Indian servants, and their objections to colonization's evils are restricted to a single look they share during the first ten minutes of the film. What is more, the king has few scenes taking this conflict on head-on, and the one character who does is later villainized. Second, the film is uneven because there are several dramatic, heart-tugging scenes that are immediately followed by sprawling shots of beautiful scenery or teaching sequences in which everybody is smiling and laughing as though nothing of consequence happened just five seconds ago. Overall, despite Foster's classic performance -- the type that has made her famous -- there are still too many structural flaws to ignore.

Such a beautiful story. Jodie Foster and Chow Yun-Fat play their roles perfectly. I loved it.

I knew the basic story from the Yul Brenner version of the King and I, but this is well done. The scene on the bridge is a bit of a stretch. But I liked the movie's humour and the lessons it teaches. The ending is appropriate as well.

Anna and the King Quotes