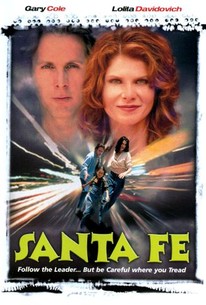 During a confrontation with a Wyoming cult, Santa Fe cop Paul Thomas (Gary Cole) saved his wife, daughter, and others but also caught a SWAT sniper's bullet, leading to eight months of rehab. Finally released from the hospital, Thomas finds his wife Leah (Sheila Kelly) involved with a local healer. Hoping to rejoin the police force, he sits through a review board procedure. Haunted by the cult experience, he launches a school program to warn youngsters about cults. Following his wife's suggestion, he attends a retreat run by counselor Eleanor Braddock (Lolita Davidovich). Although he initially dislikes Eleanor, the two are later brought together by a personals ad, and a romance develops. Shown at the 1997 Fort Lauderdale Film Festival and the 1997 Sundance Film Festival.

Anna Gunn
as Jane
View All

There are no critic reviews yet for Santa Fe. Keep checking Rotten Tomatoes for updates!

There are no featured reviews for Santa Fe at this time.