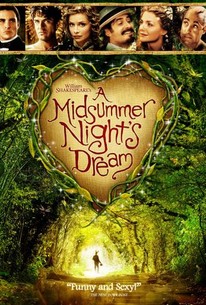 It all begins when Hermia and Lysander flee deep into the forest to escape Hermia's father, Egeus, who wishes Hermia to marry Demetrius. Demetrius himself bicycles into the woods to follow his true love Hermia. Demetrius is soon followed by yet another desperate lover: Helena, who adores Demetrius but finds her affections dreadfully unrequited. Crashing and flailing, and falling into mud puddles, the foursome find themselves near the secret home of the fairies, where water nymphs and satyrs party into the night at the fairy bars and cafes. Chaos ensues when the trickster Puck (Stanley Tucci) administers a secret love potion-causing the lovers to mix-and-match with outrageous results. Meanwhile, a band of actors come to the same woods to put on a play-a play that is interrupted when its star actor Bottom becomes a strange pawn in the love battles between Oberon, King of the Fairies, and Titania his Queen.

I remain skeptical about the ability of even the best American actors to read Shakespeare's lines without giving the impression that they are enduring very painful cultural root canal work.

Injecting the film with fun and pathos, Kline makes a superb Bottom; it's his play and he acts it to the hilt.

If there is sacrilege afoot, I'm not enough of a scholar to spot it.

The film is never a chore to watch, but others have done better by the Bard.

Unfortunately, despite the wonderful locations, sets, costumes, and strong acting, this adaptation has a strange lack of magic or chemistry between players.

Hoffman charts a middle course, and travels it quite well -- his version is neither as elaborately baroque as Max Reinhardt's 1935 film treatment nor as starkly sexual as Peter Brooks's celebrated 1970 staging.

Kevin Kline's no-life Bottom with his scrappy whiskers and ambitions is the best I've seen.

What fools these mortals be -- especially anyone who passes up Michael Hoffman's highly entertaining version of Shakespeare's famous comedy.

Sumptuous version, both earthy and enchanted.

Your high school English teacher would approve, and parts are terrifically enjoyable.

Bathed in sunshine, stardust and star power, this 'Dream' should be required viewing for anyone who insists Shakespeare is stuffy and dull. ...this is Shakespeare for the masses.

It has fun and makes you laugh.

As a rule, I dont like to watch any William Shakespeare adaptations until I have read the play first. Having just finished reading this classic comedy/love story, I was eager to see it on screen like I am of any of the screen adaptations of his wonderful works. This however, isn't as good as the great master deserves. While preparing for the wedding of Duke Theseus (David Strathairn) to Hippolyta (Sophie Marceau) a group of actors including Bottom the Weaver (Kevin Kline) rehearse an amature play for the forthcoming betrothal while forbidden lovers Hermia (Anna Friel) and Lysander (Dominic West) run away together, pursued by Demetrius (Christian Bale) and Helena (Calista Flockhart). Meanwhile, in another part of the forest, Faerie King Oberon (Rupert Everett) wants to get at his wife Queen Titania (Michelle Pfeiffer). He dispatches malicious 'sprite' Puck (Stanley Tucci) on a mission to humiliate his Queen. En route Puck can't resist messing with the mortals lost in the woods also, ensuring all sorts of confusion. Director Michael Hoffman's take transports us from ancient Greece to late-19th-century Italy (complete with newly invented bicycles) and I have to say, it works. The sets and costumes are absolutely stunning, drawing you into the magical and mystical land of the faeries. He addresses it with the same playful tone that Kenneth Branagh captured for his adaptation of "Much Ado About Nothing" and also like that, uses the same mix of both American and British actors who are perfectly suited to their roles. It's a lush and extravagant production, infused with Shakespeare's humour but something doesn't quite click. The mock Pyramus play at end is way overlong and almost grinds the film to halt. The only positive is that this is when the underused Sam Rockwell gets a chance to contribute something, but by then it's too little too late. As David Strathairn's 'Theseus' says around this time "No epilogue I pray you..." if only he'd said this 15 mins earlier, we could have had a satisfying ending. It's classic Shakespeare that, shockingly, hasn't had a decent adaptation yet. This is the best so far, but for fans of the great playwrite only. It captures the look but doesn't quite capture the heart.

A great take on a Shakespeare classic. Full review later.

Anyone can reinvent the Bard and go willy nilly with their own interpretation, but this production kept most of the message intact. With excellent casting and memorable scenes, this is a version that I adhere to as a success.