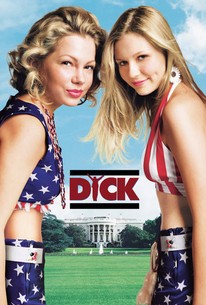 In DICK, an historically-challenged comedy, high school students Betsy Jobs and Arlene Lorenzo wander off during a class trip to the White House and meet President Richard Nixon. They end up becoming the official walkers of his dog, Checkers, and secret advisors to Tricky Dick during the Watergate scandal. Forget what you learned in the history books and prepare to be enlightened on eighteen-and-a-half-minute tape gaps, slush funds, paper shredding and everything else you never knew about the third-rate burglary that turned into a first-rate scandal in the 1970s... the last good White House scandal.

Will Ferrell
as Bob Woodward

French Stewart
as The Interviewer

Michael Eric Dyson
as Burglar No. 1

Jerry Schaefer
as Burglar No. 2

Cole Barrington
as Student No. 1

t's Watergate as seen through the eyes of two teenage girls, played with implacable good cheer by Kirsten Dunst and Michelle Williams.

Dick leaves you hoping it finds the audience it clearly deserves.

Dick is a gleefully cunning comedy!

Dick, the political satire starring Kirsten Dunst and Michelle Williams, manages to hold up twenty years after its theatrical release in 1999.

Now the truth is out there: Deep Throat was actually two giggly teenage girls who stepped into Nixon's dirty tricks during their jobs as Official White House Dog Walkers.

Blends the drama of All the President's Men with the wisdom of The Brady Bunch.

Although it eventually suffers a typically 1970s energy crisis, this satire of the early Seventies has its moments, thanks to the considerable charms of Michelle Williams and Kirsten Dunst...

Manages to land itself somewhere between All the President's Men and Clueless, with brilliant comic performances throughout.

Silly movie that only really works because of Kirsten Dunst and Michelle Williams. It's kind of like a 60's set Romy and Michele loosely based on a true story. Fun to watch.

A very enjoyable film. I really loved this film, and I thought it was a very well done political oriented comedy that had plenty of laughs, a good cast and aided by good directing. The cast here are great and the plot for the film is very well done and has a good, compelling story that has good laughs. Dick is a smart comedy that is well directed, and is quite charming as well. I really enjoyed the two lead actresses and they really made this film good. The script is very well written, and the story is flawed, but there are plenty of good moments that add so much to the enjoyment of this film. Director Andrew Fleming directs well and keeps the ball rolling and is able to keep you interested from start to finish. This is an entertaining film with a good cast that are really enjoyable to watch on-screen. This is one of those films that is brilliantly done, and despite the flaws, manages to be entertaining and fun. The cast make it work and the film very enjoyable entertainment. This is a must see film that has some good laughs and with powerful performances, great directing, this is what makes Dick a memorable film to watch. This is a smartly crafted film that delivers the laughs. If you want a good comedy, then you should check this film out. With an effective plot and cast, this is a memorable and fun comedy that has some brains. Give this one a shot because you may be surprised at how good it is. Lots of fun from start to finish, Dick is a fine political comedy.

Saturday Night Live and Kids In The Hall alumni star in this purposely schlocky comedy of errors about the Watergate break-in and the eventual demise of the Nixon White House. More cute than actually funny, but nicely cute.

I remember seeing this movie in theaters and my mom didn't want to take me until I understood the Watergate scandal. Haven't seen it since then, but it's funny and Dave Foley is fantastic. Still, I enjoyed it!