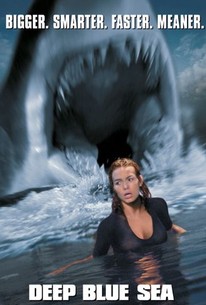 Critics Consensus: Deep Blue Sea is no Jaws, but action fans seeking some toothy action can certainly do -- and almost certainly have done -- far worse for B-movie thrills.

Critics Consensus: Deep Blue Sea is no Jaws, but action fans seeking some toothy action can certainly do -- and almost certainly have done -- far worse for B-movie thrills.

Critic Consensus: Deep Blue Sea is no Jaws, but action fans seeking some toothy action can certainly do -- and almost certainly have done -- far worse for B-movie thrills.

Dr. Susan McAlester's experiments are on the verge of creating medical history. But to reach her goal, she has violated ethical codes, genetically re-engineering the DNA of mako sharks. One of nature's most lethal killing machines has become more useful to her research, but also more intelligent and powerful in the process. But McAlester has more to worry about than the deadly specimens at the center of her studies. Her questionable methods put a strain on the relationships with her fellow team members, chiefly shark expert Carter Blake. Compounding the tense atmosphere, Aquatica's financiers are skeptical and nervous and have threatened to shut down the off-shore facility on the eve of a round of Dr. McAlester's key tests. Russell Franklin, the leading backer, has been dispatched to Aquatica to deliver an ultimatum - the research must prove conclusive, or funding is revoked. Susan and her team successfully extract brain tissue from the largest of the mako sharks. But a tragic accident during the procedure sets off a chain of events that results in irreparable damage to the research facility. With a tropical storm swirling around the now sinking Aquatica, the scientists and workers find themselves stalked by the new generation sharksfighting against the deadly man-made forces of nature they helped to create.

Erinn Bartlett
as Girl No.1

Sabrina Geerinckx
as Girl No.2

If you like big summer action flicks with plenty of bite, check this one out. Then go out for a big sushi dinner. It'll make you feel better.

The characters are sufficiently naive to get picked off one by one, but their ignorance doesn't extend to the genre conventions governing their behavior, making for some shockingly funny moments.

Deep Blue Sea, a sort of cross between Aliens (without the thrills) and The Poseidon Adventure (without the camp compensations), doesn't deliver the killer-shark-versus-A-list-character-actor thrills you crave.

This highly unlikely story about genetically enhanced sharks that terrorize the scientists who created them is one summer movie that delivers exactly what it promises: nonstop popcorn thrills.

If we're laughing at the movie: there's something very gratifying about the regularity with which Harlin cuts his cheesy characters down to size. And as a piece of cinematic engineering, it's nothing if not efficient.

This is the finest unabashedly campy B-movie of the '90s.

It's the first summer blockbuster of 1999 that delivers more than its promotional trailer promises.

A gory, trashy blockbuster that succeeds despite its waterlogged script.

Although director Renny Harlin clearly knows his way around an action scene, he fails to make Deep seem, well, deep.

The film is full of the sort of knee-jerk shockers that leave audiences bursting into nervous laughter. It's a wild ride, and the less one thinks about it, the better.

This is one of my favorite bad movies. It's full of action and ridiculous situations to delicious to ignore. Speaking of ridiculousness -- that Samuel L. Jackson death scene has got to be my favorite death on film of all time!

I have to admit this film provided some intense moments and whilst this is sort of Jaws on Steroids, it did of course share the same predictability. Of course the graphics of the Sharks etc were more impressive and so were the actual kills. It did provide a few laughs although I doubt that was the intention. I am usually a fan of Saffron Burrows, but this roles really didn't suit her and let's face it, LL Cool J has to be one of the worst Rapper turned Actors out there. The set becomes repetitive and I found myself wanting them to escape just to see different scenery.

Check out the big brain on Jaws. An unlikely posse of performers (Samuel L. Jackson, Thomas Jane and Saffron Burrows) get down and dirty with some genetically enhanced, super-smart massive sharks in Renny Harlin's hugely enjoyable, visually satisfying, severed-limb-tastic romp of a sci-fi thriller. Plus, there are enough movie references to sink the undersea lab which Deep Blue Sea is set on. The upshot is a romp that never takes itself too seriously, making for a guilty pleasure you can really sink your teeth into.