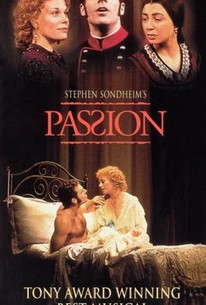 A soldier learns about himself and love in this made-for-TV filmed version of the Stephen Sondheim musical. Jere Shea stars as Giorgio, a soldier who has a passionate affair with a beautiful and married woman named Clara (Marin Mazzie). When Giorgio gets stationed in distant Italy, he is separated from Clara and attracts the attention of a homely, ill woman named Fosca (Donna Murphy). He at first repels Fosca's advances but over time he slowly warms up and not only accepts her love, but returns it.

There are no critic reviews yet for Passion. Keep checking Rotten Tomatoes for updates!

There are no featured audience reviews yet. Click the link below to see what others say about Passion!