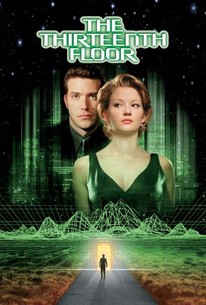 Computer scientist Hammnod Fuller has discovered something extremely important. He's about to tell the discovery to his colleague, Douglas Hall, but knowing someone is after him, the old man leaves a letter in his computer generated paralell world that's just like the 30's with seemingly real people with real emotions. Fuller is murdered in our "real" world the same night, and his colleague is suspected. Douglas discovers a bloody shirt in his bathroom and he cannot recall what he was doing the night Fuller was murdered. He logs into the system in order to find the letter, but has to confront the unexpected. The truth is harsher than he could ever imagine.

Brad William Henke
as Cop No. 1

Johnny Crawford
as Singer
View All

Critic Reviews for The Thirteenth Floor

An overwrought but underwritten sci-fi item.

Thirteenth Floor tries to be complex but is merely confusing.

The fascinating and the mysterious become the silly and occasionally comical.

The makers of The Thirteenth Floor never figured out how to build a dramatically intriguing story around the concept!

Let down by some mediocre acting, pedestrian dialogue and slow pacing!

It's an effective noir thriller that keeps you, if not on the edge of your seat, at least curious about what might happen next.

As cold and sterile as a piece of machinery.

based on the Daniel Galouye book "Simulacron 3," first published in the 1960s. ...High-tech and hippie-dippy philosophies go together about as well as chocolate ice cream and brown mustard.

Rehashes every Star Trek: The Next Generation episode where the holodeck goes haywire.

The film starts strong presenting a captivating scenario, then somewhere in the second half dips into a sappy romance.

This movie is one of those good, thought-provoking, adult-oriented science fiction sleepers like "The Arrival," "Gattaca" or 'Dark City.'

Audience Reviews for The Thirteenth Floor

I quite enjoyed the complexity of this film. Somewhat like the Matrix in that the question is "what is real?". I had the advantage that I recorded it on my PVR, so I could go back over the parts that were most confusing.

Furthur speculation on the Frankenstein hypothesis, namely: does the thing created to emulate life actually possess a soul? A computer programmer is suspected of murdering his employer, but did he? The only clue is in the new project - untested as of yet, in this piece that borrows style from Blade Runner, Dark City and Tron.

The Thirteenth Floor, what was I thinking when I watched this Movie at first? There is really no point in the Movie. This is weird.

Sort of a matrix wanna be but not too bad.