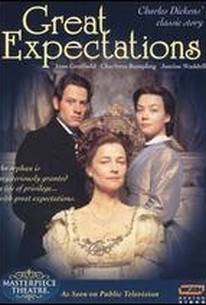 Charles Dickens' classic novel, which has been brought to the screen at least six times in the past (including a modernized adaptation released in 1998), is committed to film once again in this production for television by the BBC. Pip is an orphan who lives with his older sister and her husband Joe, a blacksmith. Pip is occasionally sent to visit Miss Havisham (Charlotte Rampling), an eccentric old crone who lives in a huge but filthy mansion and is always dressed in a decrepit bridal trousseau. Miss Havisham has a ward, a lovely young woman named Estella, with whom Pip is immediately smitten. However, Pip is convinced a boy of poor circumstances could never win her heart, which fills him with a desire to better himself. While economics would dictate a fate as Joe's assistant, one day Pip receives a message from a lawyer named Jaggers -- an anonymous benefactor has made it possible for Pip to leave the blacksmith's shop and pursue a gentleman's education in London. Pip (played as an adult by Ioan Gruffudd) soon moves to the city, where he hopes to gain knowledge, wealth and the affections of Estella (Justine Waddell). This version of Great Expectations made its American premier on the PBS cultural series Masterpiece Theatre, where it was shown as a three-part miniseries. ~ Mark Deming, Rovi

For Rampling alone, in the great house purchased with the ill-gotten gains of a bygone brewery, this production is must watching: "Who am I, for God's sake, that I should be kind?" And she certainly isn't.

There are no featured audience reviews yet. Click the link below to see what others say about Great Expectations!