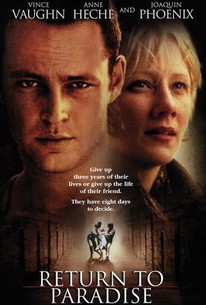 This remake of Force Majeure (aka Uncontrollable Circumstances), a 1989 film with Alan Bates and Kristin Scott Thomas, recalls the prison plight depicted in Midnight Express (1978). Rambling around Asia, getting high and just having a good time, are three young men -- Sheriff (Vince Vaughn), Lewis (Joaquin Phoenix), and Tony (David Conrad). Sheriff and Tony say goodbye to Lewis, a conscientious Greenpeace activist and nature-lover who stays on to rescue endangered Borneo orangutans. Two years later, Tony is an architect about to marry, and Sheriff has a job driving a limo around New York City. When Beth (Anne Heche) steps into Sheriff's limo, she tells him that she's a lawyer working to save Lewis. He learns that Lewis was arrested by Malaysian authorities, tried as a drug dealer, convicted, and sentenced to death. Sheriff's actions of trashing a borrowed bicycle and casually disposing of 100 grams of hash make him responsible for Lewis's predicament, but does he feel guilty enough to get involved? The execution is only eight days away, but it will not happen if Tony and/or Sheriff return to also serve time -- three years each if both come back, but six years if only one returns. Investigating this story is reporter M.J. Major (Jada Pinkett Smith), who views the situation as an important international news story. Tony readily agrees to go back and save Lewis -- but only if Sheriff also returns with him. Sheriff initially declines, prompting the desperate Beth to find ways to convince him to go. Complicating matters, Sheriff and Beth begin to find they are attracted to each other. Director Joseph Ruben filmed in Hong Kong, Macao, and Thailand, with Malaysian prison interiors shot in Philadelphia.

Deanna Yusoff
as Woman in Bar
View All

News & Interviews for Return to Paradise

View All Return to Paradise News

Critic Reviews for Return to Paradise

It's a painful prospect, to be sure, and Sheriff, in particular, insists he's no hero, but the next hour or so of handwringing conjures little suspense.

What if director Joseph Ruben didn't resort to B-movie suspense tricks? What if the fine cast wasn't saddled with a shamelessly contrived script by Wesley Strick and Bruce Robinson?

If it's to be experienced at all, Return to Paradise is best seen as a lively piece of pulp, not a profound exploration of the vagaries of the human soul.

This is a major example of a good idea, one that could have worked, being submitted to a Hollywood tag-team makeover.

The best performance in the film belongs to Anne Heche, who continues to impress with her range. Her work here is passionate, and she effectively conveys the inner conflict of a woman whose divided loyalties tear at her soul.

Like Sheriff and Tony, we're pulled both ways by the story: We want them to go back and save Lewis, but we're not exactly sure we'd do the same. That's the Prisoner's Dilemma in a nutshell.

Despite solid performances from the leads, it comes shrouded in a heavy cloud of ethics-class complications that makes it feel like a "dilemma of the week" TV movie.

Vince Vaughn finally gives a performance putting him in the serious actor category, Joaquin Phoenix is notable and Anne Heche is believable as the impassioned attorney fighting for the life of her client.

Involving drama about our responsibilities to others.

The acting is generally good -- Vaughn is very convincing as a man forced to make a difficult decision, while Joaquin Phoenix even more convincingly plays a man condemned to die.

Return to Paradise is precisely the kind of film I tend to like; one which could go many ways, and one which, if done right, could have a true and profound moral. And it didn't dissapoint.

Fine, low-key performances by Ann Heche as the attorney and Vince Vaughn and David Conrad as the two men she must persuade help sustain our interest in the characters. But after the wrong turn, the story feels as forced as it once was exciting.

Audience Reviews for Return to Paradise

An original, thought-provoking film concerning three friends who party hard in Malaysia one summer (Vince Vaughn, Joaquin Phoenix, and David Conrad), where illegal substances are used frequently and the concentration is on just "having a good time". Flash forward a few years later, two of the buds (Vaughn and Conrad) already returned to the states while one of them (Phoenix) stayed behind, and a tenacious lawyer (Anne Heche) appears out of nowhere to inform them that their friend has been arrested for possession of hash, enough to put him to death under Malaysian laws. He is sentenced to hang, with the only exception being if one of the friends or both of them return home, in which case the three of them would do six or three years together respectively. It is a somewhat complicated plot, almost to the point where you start to question if this could actually happen (it might, just not here in the States), but the driving force behind this film remains the trio of performances from Vaughn (who has never been better), Phoenix (whose performance is simply chilling) and Heche (an utterly phenomenal turn), and how you sympathize with these characters. However, the film totally careens off course in its last third, when it seems as if a Hollywood studio kicked in the door and wrecked the creative writing process. It is a shame this movie becomes just "average" when the finale goes for conventional Hollywood story swings, including a laughable final shot that is supposed to be dramatic and uplifting, as well as a severe leap in logic concerning the fate of Vaughn's character. Not a bad movie by any means, but it could have been good or great if it wasn't hamstrung by a poorly put-together final act.

The intricate workings of the moral dilemma somehow overcome the melodrama. You could complain that the concept deserved to no give-ins to schmaltz from the directors, actors and the soundtrack... but including the schmaltz makes this movie a twisted, tragic version of The Hangover.

Coincidentally, got to see 2 movies focusing more or less on someone dealing with the fear to go to prison. While one movie (The 25th Hour) was a disappointment, this one was an amazing experience. The scene depicting Joaquin Phoenix's condition in the prison was brilliant. Joaquin Phoenix played that part incredibly well, keeping it simple, sans any overacting. Highly recommended. SPOILERS: The ending was what I though it'd be, but it didn't happen the way I thought. My idea was that ultimately Lewis (Joaquin Phoenix) would ask Sheriff (Vince Vaughn) and Tony (David Conrad) to not to admit their part in crime & return. He wishes to be hanged because he feels that he'd never be able to get back to what he was (completely sane) after the bitter years he spent in prison. He now looks up on his execution as his freedom. While I found the actual ending equally okay, my only problem was with the all-of-a-sudden "media" twist which was a bit hard to digest. Overlooking that, it was wonderfully done.