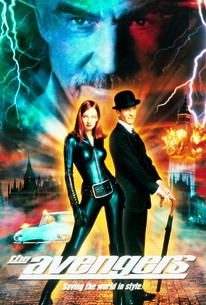 Critics Consensus: A TV spinoff that lacks enough energy to spin, The Avengers is an ineptly written, woefully miscast disaster.

Critics Consensus: A TV spinoff that lacks enough energy to spin, The Avengers is an ineptly written, woefully miscast disaster.

Critic Consensus: A TV spinoff that lacks enough energy to spin, The Avengers is an ineptly written, woefully miscast disaster.

News & Interviews for The Avengers

View All The Avengers News

Critic Reviews for The Avengers

The movie lets [Fiennes and Thurman] down with a patchwork climax that feels rushed and perfunctory.

The new Avengers is dismal in dispiriting, dreary ways, and Ralph Fiennes, playing Macnee's part, is a particular disaster.

Some bad movies are bold outrages; many others become hits. This one hasn't the juice to be either.

This Avengers film is so horrendously, painfully and thoroughly awful, it gives other cinematic clunkers like Ishtar and Howard the Duck a good name.

Neither elegant nor macho nor elegant-and-macho, Fiennes is terribly cast; Thurman at least provides the equivalent of a dressmaker's dummy on which to hang neo-mod fashions.

This big-screen version of the classic '60s TV spy show The Avengers can be added to the ignominious heap of updates, remakes, and adaptations that really didn't need to be made.

Thurman and Fiennes look great in the roles, but they don't generate a fraction of the kinky sexual chemistry that Macnee and Rigg exuded.

The only thing this Avengers shares with its swinging, earlier incarnation is a London setting.

Fiennes and Thurman look fine in the familiar outfits, but aren't very good at banter, adventure or romance.

This big-budget bore looks lovely but is so miscalculated that you can't help but wonder whether anyone involved had ever seen the original.

The cult 1960s TV series gets royally shafted by Hollywood in this stunningly designed blockbuster that's stunningly awful in every other department.

Audience Reviews for The Avengers

This movie is bad, yes, but it's an interesting type of bad movie. A lot of really cool sets and other odd visual decisions make this a rather intriguing failure. The main problem is just how boring the whole thing is, and i mean tediously boring, dull, lifeless. Uma Thurman is probably the most boring actress i have ever seen in my life. From this to Kill BIll her range hasn't improved one bit.

When evil reigns, only one team can weather the storm. Pretty bad movie! Take my word for it, there is nothing in "The Avengers" for you to get. It is not clever, its not some high concept parody, its just a really, REALLY badly written, acted, and directed movie that I doubt anyone on the production team was happy with after it had been finished. NOT recommended! British Ministry secret agent John Steed, teams up with Emma Peel to stop Sir August De Wynter from destroying the world with a weather changing machine. They are called in to investigate Prospero, a plot to blackmail Britain by controlling the weather. Emma Peel is suspected of being involved but it is discovered that she has a double who works for the real baddie, Sir August de Wynter. He threatens to freeze Britain, at one point unleashing a blizzard on Trafalgar Sqaure.

You'd hope that with Sean Connery given the chance to play a Bond villain that this would be a bit of a rousing party ... but no. Someone forgot that the television show's appeal lightly elbowed the whole fascination with James Bond, lightly, not bludgeoned, and so the sense of fun is noticeably absent. The sets, the wardrobe, the double entendres are all present and how, overplayed to boredom. Unfortunate.

Yes the plotline is absolutely rediculous and Uma Thurmons acting is terrible as well as her costumes but guess who else is in this movie...RALPH FIENNES! and He can NEVER make a movie bad. He saves them majority of the time. Now he's done it again with smooth moves and wonderful wordrobe. O how I love him. Such class one can only pray to see a glimps of him any man today...sigh.