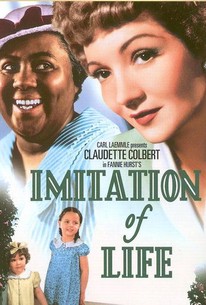 The first of two film version of Fannie Hurst's novel, 1934's Imitation of Life chronicles the friendship between two women--one white (Claudette Colbert), one black (Louise Beavers). Colbert is a widow with a baby daughter who hires Beavers, who also has a daughter, as a housekeeper. Colbert is a working girl who yearns to operate her own business, which she does thanks to Beavers' special pancake recipe. A family friend (Ned Sparks) suggests that the ladies form a corporation to merchandise the "Aunt Delilah" pancake mix, and within ten years both women are quite wealthy. Colbert's relationship with her teenaged daughter (Rochelle Hudson) is strained when both ladies vie for the attentions of the same man, but these problems are minor compared to the travails of Beavers, who not only must deal with the De Facto segregation of the 1930s but must also contend with her restless daughter (Fredi Washington), who resents being an African-American and attempts to pass for white. The heartbroken Beavers dies, and at her funeral her now-chastened daughter weeps out her apologies for turning her back on her mother. Imitation of Life was remade in 1959, its story glamorized and updated to accommodate star Lana Turner.

William B. Davidson
as Man

G.P. Huntley
as Man at Party

Hattie McDaniel
as Person at Funeral

Critic Reviews for Imitation of Life

Because of the authority with which it is acted and the skill with which Director John Stahl has built up individual episodes, the picture remains an efficient tearjerker, outspoken in its praise of motherlove.

Director John Stahl was a notable visual stylist (although this film contains few of his characteristic flourishes) and was possessed of the prime asset of the melodramatist, the ability to take his material seriously and make it play.

Despite the sincerity of John M. Stahl's direction, he scarcely manages to conceal the shallowness of the play's ideas, the commonplace nature of its emotions, nor the rubber-stamp quality of its writing.

Imitation of Life is a strong picture with an unusual plot.

More character study than polemic, [Imitation of Life is] wonderfully warm and witty.

Imitation of Life is a long film, full of faithful detail, but often slow and often dull.

This exemplary example of the kind of melodrama that became known as a "woman's picture" is masterfully directed by John M Stahl.

A fascinating exploration of family bonds in the face of societal prejudices.

Though it doesn't fully explore the racial issues it raises as fully as it could have, for its time it was daring and courageous.

Stahl doesn't belabour the racial aspect of the film, but by making it an underlying theme throughout he gets his message across more subtly with noticeable skill.

Audience Reviews for Imitation of Life

What an interesting film this was. On the surface, you have Colbert in a charming role as a self-made woman who makes it to the top with pluck, ambition, and a secret pancake recipe she gets from a maid. But that's not what makes the movie interesting. Colbert's maid is played by Louise Beavers, an African-American, and also a single mother. Her daughter Peola, played by Fredi Washington, is light-skinned, and wants to 'pass' as white. There are several brutal, heart-wrenching scenes between the two of them - as a child (played by Dorothy Black), Peola is upset about being called black, believing it an insult; later in school, she has to slink out of an all-white classroom amidst stares and whispers to see her mother who has shown up unexpectedly; and finally, as an adult, pretending she doesn't even know her at her job, where she's also 'passed', and later telling her she wants to disown her entirely. Beavers' character is sweet and strong, and bears this suffering to her deathbed. These are the scenes with real emotional impact in the story, and it's stunning, though not surprising, that neither Beavers nor Washington where nominated for an Academy Award. But Colbert was, even though she was also nominated in the same year for 'It Happened One Night'. How true this trend was 82 years ago, and how true it is today (see 'Creed'). Now it is true that the love story in the movie for Colbert with William Warren is captivating, and it gets complicated when her daughter falls in love with him as well, and despite no wrongdoing on his part, creates a dilemma for Colbert. I liked this twist, it was unexpected and created a little angst for the white characters, who were otherwise in beautiful clothes, sipping champagne, and dancing the night away. However, the resolution of this at the end pales in comparison to the resolution of Beavers' story which precedes it. The movie is a great snapshot of what pushing the boundaries meant in 1934. On the positive side, you have a single mother shown balancing family and work, and keeping control of her business as it skyrockets. You have Fredi Washington, a light-skinned African-American actress (who in real life disdained 'passing') hired to play the role of Peola, when it was much more common to hire whites. You have Colbert's character inviting Beavers into her home and not showing an ounce of racism as she talks to her, or concern when by hiring her they'll live together. And you have a movie that showed very sensitive racial subject matter, revealing to the audience the real struggle African-Americans go through, and in a way that was thoughtful, not exploitative. On the other hand, you have Beavers' being simple-minded, superstitious, and wanting to remain subservient to Colbert's, even when they've made enough money and it's no longer necessary. While it underscores her big heart, it also perpetuates a myth, one that is very convenient for Caucasians. Also, because the Hays Code had recently gone into effect, references to Peola being of mixed-race were avoided, because 'passing' itself was already dangerous ground, and the concept of racial mixing was a definite no-no. Her father is simply referred to as having been 'light-skinned'. Just as importantly, a scene in the script depicting a black boy being attacked and nearly lynched for coming up to a white woman was excised; conservative America was not willing to admit this shameful truth. All in all though, an important film. The Colbert story is cute on its own, but I wish the emphasis had been placed more on Beavers, that it had been a movie more from her viewpoint with the minor character and subplots belonging to Colbert instead. Fair or unfair, I knocked it down a half a star as a result.

I did not see the Douglas Sirk version that was produced 20 years later but I found this depiction of two girls, one white and one black, who were raised together by circumstance is ever so good.

I normally hate remakes, but Sirk's remake of this movie presents a richer, well rounded, and more realistic story than this movie does. Although I do applaud the film makers for choosing this story, they disappoint the audience by not going into depth with the characters.

This is more of a social conflict drama with the mother-daughter conflict woven in, a fine film but the Lana Turner version is more emotionally involving.