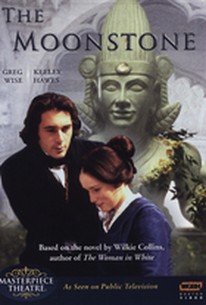 Wilkie Collins helped pioneer a new literary genre when he published The Moonstone in 1868, widely believed to be the first detective novel, and this adaptation for British television brings his classic story back to life. In 1848, a few days before her birthday, Rachel Verinder (Keeley Hawes) receives a rather surprising gift -- the Moonstone, a rare and valuable diamond stolen from a Hindu shrine and believed to be cursed. The Moonstone was left to Rachel by her uncle, John Herncastle (Terrence Hardiman), whom she last saw two years ago, just before she informed him she never cared to talk to him again. Herncastle's aide, Franklin Blake (Greg Wise), is the man who arrives bearing the diamond, but the next morning, the jewel is gone -- as is Blake. Did Blake steal the Moonstone, or someone else looking for a fast fortune at the expense of a possible onslaught of evil forces? And is Herncastle really gone? The Moonstone was first aired in the United States as part of the award-winning anthology series Masterpiece Theatre. ~ Mark Deming, Rovi

Critic Reviews for The Moonstone

There are no critic reviews yet for The Moonstone. Keep checking Rotten Tomatoes for updates!

There are no featured reviews for The Moonstone at this time.