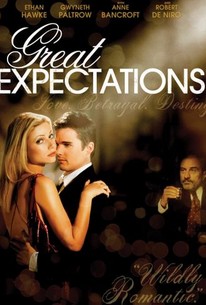 Critics Consensus: Great Expectations is all surface tension: beautiful people shot in beautiful locations without any depth or emotion.

Critics Consensus: Great Expectations is all surface tension: beautiful people shot in beautiful locations without any depth or emotion.

Critic Consensus: Great Expectations is all surface tension: beautiful people shot in beautiful locations without any depth or emotion.

Alfonso Cuaron (The Little Princess) directed this Mitch Glazer screenplay, a modernization of the 1860-61 classic by Charles Dickens. Some situations in the film are presented as memories -- the way the central figure, Finnegan Bell (Ethan Hawke) recalls events many years later. At a Florida fishing village, eight-year-old orphan Finn Bell (Jeremy James Kissner), talented at art, is left in the care of his sister and her husband, Joe (Chris Cooper). One day, Finn helps a chained, escaped convict who appears in the surf. On other days, he visits Paradiso Perduto, where he plays with young Estella (Raquel Beaudene), niece of the mansion's colorful, flamboyant, and extremely wealthy owner, Ms. Dinsmoor (Anne Bancroft), who parallels the novel's tragic Miss Havisham, a woman jilted at the altar and left emotionally scarred and mentally imbalanced. As Ms. Dinsmoor watches Finn draw a portrait of Estella, she plots to mold Estella into a hard woman capable of destroying men. In a flash forward to the '90s, Finn (Hawke) and Estella (Gwyneth Paltrow), now in their late teens, re-create the water-fountain kiss of their childhood, but Estella vanishes, breaking Finn's heart to such a degree that he doesn't draw or paint for seven years, choosing to eke out a marginal existence with his uncle Joe (after Finn's sister abandons the two). Then Manhattan art representative Jerry Ragno (Josh Mostel) turns up with a startling offer -- if Finn will return to painting and relocate in New York, Ragno will give him a one-man show. With an apparent assist from Ms. Dinsmoor, Finn makes the move and begins his new life with great expectations and a deadline of 10 weeks to complete the necessary paintings. When Finn next encounters Estella, she has a wealthy boyfriend, Walter (Hank Azaria). As Finn once again becomes entranced by Estella, he also begins to question exactly how his life is being manipulated. Francesco Clemente did the paintings and drawings seen in the film. Shown at the 1998 Sundance Film Festival. ~ Bhob Stewart, Rovi

Peter Jacobson
as Man on Phone

Clem Caserta
as Hitman No. 1

Frank Pietrangolare
as Hitman No. 2

Dennis Paladino
as Hitman No. 3

Clem Caserta Jr.
as Hitman No. 4

Marc Macaulay
as Cop on Boat

The film is a successful translation of the basic material from one period and approach to another. Especially in the early Florida scenes, it seems timeless.

Where the film fails is in its commercial proclivity to centre the narrative trajectory around a fairly asinine updating of the Pip/Estella love-match into a soppy romance.

Cuarón and company end up throwing all the style they've got at the film... to compensate for a perpetually stalled drama.

In the end, shiny surfaces are just that--surfaces, with nothing necessarily underneath.

It's a fairly minor film, but quite lovely and successful at creating its own time and place.

Charles Dickens' novel has been pared to the bone and set in the present day, and the result is a beautifully shot mess. The characters' motivations could not be any less clear.

The film's exectution is more of a tragedy than the story.

his film doesn't have anything to say, it just wants to make a fashion statement: Pretty people should get to do stuff other people don't get to do.

The drama has a surface charm and panache that draws out the romantic in all of us.

I saw this film a few weeks ago and just couldnt get it out of my mind. It is totally dazzling. Its captivating. I think it probably the closest thing I have seen to a fairytale. It remains true to Dickens and has a great cast. I would say its near perfect

Such a great love story, really beautiful! Based on Charles Dickens' timeless tale, this is a story of the love of a man for an unreachable woman. Updated to modern day New York City, the story concerns a man of modest background who falls in love with a rich girl. But when a mysterious benefactor greenlights the man to make his dreams come true, everything done has the ultimate goal of making Estella fall in love with him...

Sweet, made me cry. *sniff!* ^_^ This is a disaster movie for anyone who paints tho.

This modern reworking of the Charles Dickens novel has Gwyneth Paltrow break Ethan Hawke's heart over and over again. Not enough emotion or complexity in a facile narrative transplanted to the contemporary New York art world.