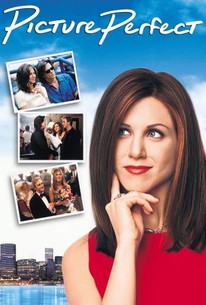 Friends star Jennifer Aniston made her debut as the leading lady of a feature film in this romantic comedy. Kate (Aniston) is an art director with an advertising agency whose personal and professional life is stuck in neutral; while her work is good, her boss Mr. Mercer (Kevin Dunn) won't give her a promotion, and while Kate is attracted to co-worker Sam (Kevin Bacon), he's not interested in her. Kate learns that Mercer is loath to promote single people, because without permanent attachments they're free to leave whenever they wish. Kate's friend Darcy (Illeana Douglas) comes up with a possible solution: use a photo of Kate with handsome stranger Nick (Jay Mohr) to convince Mercer that she's engaged to be married. The ruse works -- Kate gets her promotion, and Sam, who's attracted to women who are already spoken for, starts showing her some attention. But soon Mercer wants to meet Kate's husband-to-be; Kate tracks down Nick and persuades him to pose as her intended for an evening, but Nick decides at the end of the night that he's in love with her. Picture Perfect was written and directed by Glenn Gordon Caron, who created the TV series Moonlighting. ~ Mark Deming, Rovi

Ivar Brogger
as Ad Executive No. 1

Peter McRobbie
as Ad Executive No. 2

Bray Poor
as Ad Executive No. 3

Daryl Edwards
as Ad Executive No. 4

Jenna Stern
as Ad Executive No. 5

Vimesh Thakar
as The Maharishi

[Aniston] has the rare gift of getting you to root for her in the most trying of circumstances, a quality that will stand her in good stead when she progresses to better material.

[Aniston] at her best can recall young Barbra Streisand in her What's Up, Doc? days.

Aniston doesn't need dialogue to catch Kate's quicksilver moods. It's the sitcom lines, at the service of a contrived plot, that choke her.

Aniston comes across like an imitation of a movie star instead of the real thing. She gets less attractive as the film goes on.

Insubstantial and oversweet, it still refreshes as a midsummer brain cooler.

There are times when a bad ending doesn't seriously damage a motion picture. This is not one of those.

Sure, the movie follows a basic romantic comedy formula, but it has a freshness about it, mainly because Aniston and Mohr make a sweet match.

The characters are one-dimensional and surprisingly shallow, the film is unpleasantly predictable, and the realism factor here is You've gotta be kidding.

The main thing that makes it watchable are the performances of Jennifer Aniston, Jay Mohr and Kevin Bacon. The three make an interesting romantic triangle, despite numerous plot problems, such as the story is basically unbelievable.

Not quite bad enough to call rancid, and that's the best I can say for it.

An average Aniston Rom-Com. Not her best or her worst. It's ok but I have watched a few of her more recent films lately that I thought were better or funnier at least.

The ultimate chick flick. Adorable movie. Jen is adorable, Kevin is gorgeous, & jay is 2 cute 4 words. Would absolutly recommend this movie 2 anyone who loves romantic comedies. I love it! <3

I love this movie again another brillant romcom starring my favourite jennifer aniston, this is a witty, entertainingly hilariuosly sexy romcom which keeps you glued to your tv!! All though fairly predictable towards the end its still very good!! Aniston plays a job obsessed woman who needs to marry someone just so she can move along on job career prospect and thats where Jay mohr comes in giving a very entertainingly funny performance!!! Really worth a watch!!!

Rom com about a woman trying to advance her career.