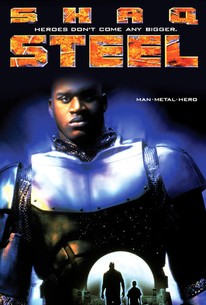 Critics Consensus: Steel is a badly-acted movie that indulges not only in superhero cliches, but also the sappy TV-movie-of-the-week ones.

Critics Consensus: Steel is a badly-acted movie that indulges not only in superhero cliches, but also the sappy TV-movie-of-the-week ones.

Critic Consensus: Steel is a badly-acted movie that indulges not only in superhero cliches, but also the sappy TV-movie-of-the-week ones.

Low-rent, poorly-lit superhero action is the order of the day in this film from television director Kenneth Johnson -- who makes several references to his series Alien Nation throughout the course of the movie. NBA basketball superstar Shaquille O'Neal stars as John Henry Irons, a weapons designer and metallurgical genius who is developing a new sonic weapon for the military with the help of Sparks (Annabeth Gish), a computer whiz. When an accident caused by unscrupulous superior Nathaniel Burke (Judd Nelson) leaves Sparks paralyzed, Irons quits his job in disgust. It turns out later that Burke has begun mass-producing the weapon and selling it to terrorists and L.A. street gangs, so Irons and Sparks team up with Uncle Joe (Richard Roundtree), a junkyard artist, to create a suit of armor and a gadget-packed sledgehammer. Irons dons the suit and becomes known as the superhero Steel, who kicks criminal posterior all over the city with his impenetrable get-up and high-tech gizmos. Before long, Burke's comeuppance is in the offing. Although specific references to it were excised between the source material and script, the original DC Comics version of Steel was a spin-off of the Superman comics series. ~ Karl Williams, Rovi

Michael Shamus Wiles
as Skinhead No. 2

Kamau Holloway
as Skin No. 1

Norris Young
as Skin No. 2

John Patrick Hayes
as Pre-Teen No. 1

Manner 'Mooky' Washington
as Pre-Teen No. 2

John Donohue
as Crewman No. 1

Zane Graham
as Basketball Kid No. 2

Its protagonist is good-natured, wholesome, devoid of moral flaws and acutely civic-conscious. But good intentions aren't good enough, and this Shaq attack is too broad and episodic to attract anything other than the most undemanding crowd.

The Los Angeles Lakers' center, at 7-foot-1, is appealing and breathes much needed large life into a tolerable stinker of a film.

Slow to gather momentum and generates little excitement or tension.

The concept may not be bad, but there are times when the execution borders on embarassing.

Steel isn't a movie to excite or even entertain. It exists to move merchandise -- specifically, Shaquille O'Neal's oversized physique and marketing machine.

Reliant on a heavy formula of repetition and camp that's more obnoxious than cute.

Has the distinction of being one of those movies that's so bad it actually has some solid entertainment value.

an efficient concoction with some nice special effects (there is this sound wave gun that makes the air wiggle when it's shot) and an easy-to-follow plot, about stopping illegal weapons merchants. There are plenty of stunt sequences and futuristic gimmick

What in God's name were they thinking???

It could be worse. Shaq could be rapping.

Why does Shaq hate us so much?

This movie was...Okay. It certainly wasn't good, but it wasn;t too bad either. Shaq can't act, no more than he can shoot a decent free throw, but there was still some good. But as always, we begin with the bad. The basketball puns in this movie were just PAINFUL PAINFUL PAINFUL!!! For example, there is one scene where Shaq has too shoot a grenade throw a hole in the wall with unlimited time and no one guarding him. GEE, I WONDER WHAT THAT MEANS. OUT OF ALL THE BASKETBALL PUNS, IT COULD BE ANY!!! Then there was the acting. Shaq, of course, was pretty bad, but the villain was pretty bad too. I also didn't like the acting of the annoying kid. Just attrocious. There was good though. The special affects in this movie had too be good to make up for the fact that Shaq played the main character, and they were. I felt like I was watching a Terminator film! Particulary the hammer. I lied the costume too, even if the entrance was a little dumb. The plot was pretty good too, for a Shaq movie. It's kind of like Iron Man, but I don't really want to explain it. This movie isn;t perfect, but it isn't horrible. In my opinion, it's smack dad in the middle.

About the same as Kazam in terms of quality, this is basically the poor man's Batman, even circa '97. Again, it has a bizarre unintentional comedy element to it that makes it worth watching. This has too many seriously toned moments though, which makes it tough to even get through. Poor Shaquille O'Neal really wanted to be a movie star.

im pretty sure the words "What? you've never seen Steel?" have never been blurted out before.

Bullshit! BULL...SHIT!!! He fell off a fucking bulding...Superman saved him...he devoted his life to fighting crime! What is so hard about that to have to change things? And Shaq? This film was doomed from pre-production.