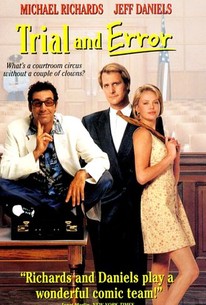 Critics Consensus: Trial and Error gets some laughs out of the comedic chemistry between its pleasantly mismatched leads, although the results are still somewhat less than memorable.

Critics Consensus: Trial and Error gets some laughs out of the comedic chemistry between its pleasantly mismatched leads, although the results are still somewhat less than memorable.

Critic Consensus: Trial and Error gets some laughs out of the comedic chemistry between its pleasantly mismatched leads, although the results are still somewhat less than memorable.

Up-and-coming L.A. corporate lawyer Charles Tuttle (Jeff Daniels) is going to marry his wealthy boss's beautiful daughter Elizabeth (Alexandra Wentworth), but first he must head to a remote Nevada town to help his employer's rapscallion relative out of a legal bind. It's all routine for Charlie until his bumbling best buddy Richard Rietti (Michael Richards), a cut-rate actor, decides to throw him a surprise bachelor party in the desert. Richard means well and throws one enormous bash. Unfortunately, Charlie gets totally plastered during the party and the next day is too hung-over to move, let alone go to court. Richard volunteers to go in Charlie's stead and ask for a continuance -- after all, he is an actor. What could go wrong? Unfortunately everything, for both the local District Attorney and the judge refuse to delay the trial. Both are anxious to put long-time con man Billy Gibbs (Rip Torn) away for good. Since they think Richard is Charlie, the actor and the lawyer have no choice but to maintain the status quo and hope that no one discovers their ruse. Charlie does his best to teach Richard the legal ropes, but it is an uphill battle all the way. Along the way, Charlie meets an earthy local girl, Billie Tyler (Charlize Theron) who forces him to reevaluate his life. Essentially a fish-out-of-water comedy, the film attempts to strike a few more serious underlying notes along the way. The film is the first in which television character actor Michael Richards, best known for his hilarious portrayal of 'Kramer' on the sitcom Seinfeld, receives top billing.

Brian Mahoney
as Man in Bar

Gerry Spence
as Himself

Critic Reviews for Trial and Error

Ever since "Something Wild," Daniels has perfected his gift for looking increasingly beaten down. He's a perfect foil for Richards's wilder shenanigans.

"Trial and Error" is a breezy confection for a summer's day that effectively conjures up a smile.

If someone wanted to make someone else a star, it's hard to imagine a better route than Lynn takes with Theron, who brings the movie to its knees every time she comes on screen.

Think of it as My Cousin Cosmo.

The movie reminded me a little of some of Billy Wilder's work in the way he took the characters seriously, or at least as seriously as the material allowed, and got a lot of the laughs by playing scenes straight.

There are chuckles to be had, but get your own continuance by waiting for the video.

Something is surely amiss when the trial antics are the least interesting aspect of a courtroom comedy,

Lynn's attempt to replicate the courtroom zaniness of My Cousin Vinny is a humorless pie-in-the-face.

A hilarious comedy with delicious comic bits on lawyers, juries and experts.

A nicely balanced blend of zany comedy and touching romance.

A comedy that's much fresher and sunnier than it has any real right to be.

Audience Reviews for Trial and Error

considering all the talent this project had to offer its a shame nothing really comes together. the main issues are the mismatched pairing of Richards & Daniels which doesn't work. Richards doesn't really offer the humour he does from Seinfeld which is why this film stayed off everyones rader back on its release. Daniels has proven he is capable of comedy roles but he is unable to inject anything remotely resembling a likable character. Theron is quite good in a thankless role but allows Daniels to share some meaningful screen time with. I really wanted to like this film but it is poorly directed and the jokes miss more then they hit.

Okay comedy with a witty title. Jeff Daniels and Michael Richards make a good mismatched-buddy team, and to his credit after the first 15 minutes Richards manages to inhabit his character without too many reminders of Kramer. Charlize Theron is very winning in an early supporting role as Daniels' love interest. Seems they forgot this was a comedy after an hour, instead adding an ill-advised romance between Richards and Jessica Steen who actually provides a worthy adversary. Final verdict: with plenty of opportunities for satire or slapstick available, it should have been funnier.

Director Jonathan Lynn makes another courtroom delight, following the success of My Cousin Vinny. Michael Richards delivers the expected Dramer-esque slapstick he became famous for on TV's Seinfeld, but then allows his character a more serious and rational side.

Very funny. Espicially since Michael Richards was in it.