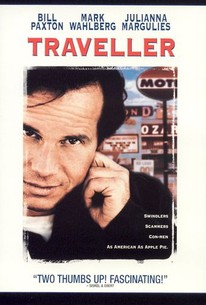 Critics Consensus: Though it may not explore its core issues as deeply as some may like, Traveller is nevertheless a smart and funny portrait of a relatively unfamiliar subculture with some strong performances.

Critics Consensus: Though it may not explore its core issues as deeply as some may like, Traveller is nevertheless a smart and funny portrait of a relatively unfamiliar subculture with some strong performances.

Critic Consensus: Though it may not explore its core issues as deeply as some may like, Traveller is nevertheless a smart and funny portrait of a relatively unfamiliar subculture with some strong performances.

Actor Bill Paxton produced this unusual film about a clan of Irish-American con artists practicing in the American South. They live in a secluded compound and have their own time-honored customs. Pat (Mark Wahlberg) is returning to the hideout for the funeral of his father, who irked the clan by marrying an outsider. Because his mother is not Irish, the compound's boss, Jack Costello (Luke Askew), tells him that he's no longer welcome there. But Bokky, played by Paxton, takes the younger man under his wing and teaches him the clan's trade. Bokky specializes in cheating homeowners by charging them to apply driveway or roof sealant, then leaving before they discover that it's only black oil. He also buys and resells shoddy mobile homes. Pat soon proves more nervy and creative than his boss. They try to scam a bartender, Jean (Julianna Margulies), but Bokky falls in love with her. Jean needs cash to pay for an operation for her hearing-impaired daughter, so Bokky finally agrees to work for a cowboy con artist named Double D (James Gammon), who has been trying to recruit him for a big job in Nashville. ~ Michael Betzold, Rovi

Jim Flowers
as Bar Regular No. 1

This fresh and interesting story about a tight-knit clan of Irish grifters in the rural South who make their living scamming is a ''con men on the road'' picture all the more welcome during a season of junky action thrillers...

Eastwood's longtime lenser Jack Green makes a decent feature debut with a well-acted comedy-adventure that in its good moments recalls such classics as The Sting and The Grifters.

Though competently directed by Clint Eastwood's camerman Jack Green, matters unravel when the film ratchets up the tension and become entirely implausible at the close.

Paxton has an Everyman quality that makes it possible to overlook his skill, but here he finds the right way to be true to his criminal career while still scamming: His heart is in the right place, even if his hand is in your pocket.

This is a film about people who get by depending on antisocial skills and outlaw wit, and Green and writer Jim McGlynn clearly empathize with their independent spirit and lifestyle, even if they don't completely approve.

The film is just there on screen, better than watching a clock, better than contemplating mortality, an OK experience. There are movies like this. No sense in pretending otherwise.

Interesting slice-of-life about a deliberately little-known pocket of American culture.

An engrossing human drama set among a subculture unknown to most Americans.

Traveller offers a fun, escapist ride when it allows moviegoers the thrill of taking part in the clever trickery, but it's even better when it explores the intense loyalty and Irish-based customs of these masterful thieves.

I was disappointed that it couldn't follow its genuinely good and original first half with a more interesting coda.

Traveller does a number of things well, with some funny scenes, strong performances, and a unique overall take on the "con game" subculture. At the same time, I did find the script to be at parts underwritten, and at parts overwritten. We never quite fully appreciate the clan, or how it impacted Wahlberg's father, making many of the character motivations murky. The ending also lost its way, with so many twists that the believability factor that the film had most of its run grew thin. The flaws are ultimately outweighed though, by the film's world building; the subculture, though not entirely fleshed out, feels real, the cons they play (predominately), feel oddly tired but effective. The world the film creates feels equally tragic, funny, and fascinating. 3/5 Stars

Really cool smooth drama about a swindling gypsy (Bill Paxson) named Bokky Sherlock, that is the head swindler in the family of Irish clan who works for (Luke Askew) Boss Jack Costello. In turns for loyalty to the clan whatever they collect out of their swildlings, a percentage must be returned to care for the clan as well as protection for kinfolk. Sure as it turns out, a young man (Mark Wahlberg) Pat O'Hara comes home to bury his father only to find resentment from the same folks that gave him a livelihood. Boss Jack Costello is against Pat O'Hara's staying because his father turned his back on the family, to find his true love outside the brood. Before matters can get any worse, Bokky steps in to take Pat in under his wing to show him the way of the clan, against Boss Jack's advised wishes. This movie really holds you in as the deeper the scams get the more interesting the story unravels...into an untimely, yet bloody ending. Timelessly interesting..with a catchy beginning "King Of The Road" tune. See this, it is not that bad!

When I saw this it was just called Traveller. Anyhow, what drew me to this was Paxton having a lead role. The story was great, telling the story of modern day gypsies; the scams they pull and the lifestyle they live. Add into the mix one of Mark Wahlberg's first performances and an excellent plot and I'm surprised this film isn't ranked higher in hidden gems category. Oh well, Paxton rules!