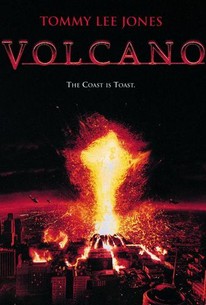 Disaster visits jaded L.A. in the form of an underground volcano, not the big earthquake all the citizens expect. Shot on the largest set ever constructed in the U.S., in nearby Torrance, California, Volcano is a big-budget, special-effects-laden disaster movie with a standard plot. Tommy Lee Jones plays Mike Roark, a by-the-book emergency management director who is spending the weekend with his daughter, Kelly (Gaby Hoffmann), when the previously-unknown volcano blows. Sassy, brainy scientist Dr. Amy Barnes (Ann Heche) is the first to warn of the threat, which begins by sucking one of her co-workers into a steaming fissure. As the lava starts to spurt in red-hot fireballs, Kelly is injured, and Mike sends her to the hospital in order to attend to his duties, rescue citizens, and run the city's emergency response. Eventually, Roark and Barnes team up to battle the eruption while sparks of romantic attraction fly. ~ Michael Betzold, Rovi

Brian Markinson
as OEM Staffer No. 1

Robert Wisdom
as OEM Staffer No. 2

Katie Rich
as OEM Staffer No. 3

Ceal Coleman
as OEM Staffer No. 4

Phil Nee
as OEM Staffer No. 5

Carlos Cervantes
as OEM Staffer No. 6

George Zaver
as OEM Staffer No. 7

Marty Levy
as OEM Staffer No. 8

Wayne Grace
as OEM Staffer No. 9

Josie Dapar
as Survivor No. 1

Joy Baggish
as Survivor No. 2

Howard DuVall
as Engineer No. 1

Sam Alejan
as Engineer No. 2

Gary Kent James
as Engineer No. 3

Robert Tittor
as Engineer No. 4

David T. Mabowe
as Engineer No. 6

Ken Thomas
as Engineer No. 7

Eddie J. Low
as Engineer No. 8

Tom Crabson
as Passenger on Train

Jennifer Bjorklund
as Herself

Lonnie Lardner
as Herself

Frank Buckley
as Himself

Harvey Levin
as Himself

Larry Carroll
as Himself

Chris Myers
as Himself

Angie Crouch
as Herself

Shepard Smith
as Himself

Steve Edwards
as Himself

Christopher Spinder
as Himself

Sasha Foo
as Herself

Jeremy Thompson
as Himself

Rick Garcia
as Himself

Peter Trunk
as Himself

Penny Griego
as Herself

Michael Villani
as Himself

Bruce Orchid
as Himself

Paula Bond
as Herself

Charles Perez
as Himself

Sandra Clark
as Herself

Rich Goldner
as Himself

Leo Quinones
as Himself

Juan Carlos González
as Himself

Alina Recasens
as Herself

James Scott Hodson
as Himself

Walter Richards
as Himself

Luann Lee
as Herself

Sergio Urquidi
as Himself

Al Naipo
as Himself

Karl T. Wright
as Himself

Warren Olney
as Himself

Andrea Wynn
as Herself

Takayuki Yamauchi
as Himself

D. Lucey
as Herself - The Media

Richard Saxton
as Himself - The Media

Jane Wells
as Herself - The Media

Chris McWatt
as Himself - The Media

Jillian Warry
as Herself - The Media

Jean Martirez
as Herself - The Media

Jane Velez-Mitchell
as Herself - The Media

Jere Laird
as Himself - The Media
View All

Volcano, busily and cheerfully hysterical, always has some new fish to fry, new truck to melt, new skyscraper to tumble or new manhole to pop with a radiant gusher of movie magma.

Never generates a head of true excitement, partly because the characters remain constructs designed to perform defined functions, and partly due to the time-worn hokiness of the whole disaster-film format.

Jones and Heche work hard to dig up an emotional rapport from next to nothing, while the slow but inexorable progress of the lava makes for more suspense than the usual slam bang firework display.

The coast may be toast, but it's the lava, covering everything like a malevolent tide of melted butter, that makes this a disaster picture that's tastier than usual.

Hundreds of screen technicians obviously slaved on the effects -- and for what? A dopey subplot about a bogus arrest. Soap opera involving Jones' injured daughter.

Like the substantially better Twister, this film insists on a thunderous, exhausting pace that inevitably becomes deflating.

There's a glorious faux-plausibility to the proceedings that makes movies like Volcano all the more entertaining.

None of it makes a hell of a lot of sense and the supporting cast are wallpaper thin, but Volcano is at least hot on entertainment.

Movies like ``Volcano'' exist for their gigantic, humongous, eye-popping special effects and this picture delivers those -- Big Time.

Volcano was really ahead of its time and time still hasn't caught up. In Volcano they thought of ways to stop the lava. They weren't going to give up L.A. You don't cast Tommy Lee Jones as the chief of emergency services and ask him to run.

The fairly anticlimactic final stretch ensures that Volcano concludes on a less-than-engrossing note...

The second volcano disaster film released in 97 and clearly a different tone, didn't do as well as 'Dante's Peak' and its easy to see why. First off the plot, like most all disaster films, is completely identical to that other volcano film. This film kicks off almost straight away with the action and pending volcano but overall its all the same. Simply replace Brosnan with Jones and the fact no one believes him until it just darn too late. From there on the film becomes a ludicrously silly action/thriller which really should be titled 'Lava' as that's all its about, you only see the small volcano for a few shots. You can look at this film as more of a blockbuster 'arcade' type as its not very realistic and overly flashy. Sure its got everything you would expect in a disaster film including the heroic sacrifice, obligatory dog, a few people being melted away in lava (had to have that!) but it also has so much cheese. The forced racism sub plot between a white cop and black youth who at the end make up and help each other seemingly vanquishing the hatred? OK its a good sentiment but holy crap its lame. The film progresses ever predictably towards its ever so obvious happy ending as downtown LA melts n bubbles away. You just move from one catastrophic setup to the next, some with your typical heroic bookend and some with your typical emotional bookend. The effects are pretty good in places yes, gotta give the film that, the lava does look pretty hot and you do get a good sense of sweltering sheer heat from the action. The final finale is an utter ridiculous joke that simply doesn't help the film a tall. The way they solve the problem in the time they have is just plain comicbook stuff, add to that the over the top end sequence for Jones which is laughable. Luckily the solid Tommy Lee saves the film from utter B-movie obscurity with his craggy features. Nowhere near as good as 'Dante's Peak' and nowhere near as accurate with the facts. Not a total problem as we know off the bat this ain't no serious flick. Unfortunately you can't help but compare it to the superior earlier volcano flick which ticks all the right boxes including realism and thrills. End of the day this just feels like some Hollywood suit thought how cool it would be to see how much destruction and mayhem there would be if you moved a volcano from way out in the wilderness to a major city. Yeah we can cause lots of shit to blow up and melt in a city!.

Volcano is a decent disaster film with a good cast. Continuing the trend of epic disaster films, Volcano though engaging and somewhat entertaining and fun. However the film could have been much better than this and the film relies on clichés from the genre to establish its story. Volcano is entertaining, and is a decent disaster film; however it fails to do anything new or exciting with the genre. I mean the film is basically Dante's Peak in Los Angeles. There's a good cast here, and they manage to keep Volcano from being a total dud. I enjoyed the film, but the film could have been much better and the film does lack a bit, and leaves a lot to be improved on. Volcano can be viewed as a popcorn flick and nothing more. There's enough thrills here to be entertained, but the film could have been done much better. There are some cool special effects, but the film does lack in substance and effective story buildup. Some disaster films work well, but other scrape by, and this is one that almost becomes a dud. However there are enough good elements to make the film watchable and it's a decent action/disaster film for what it is. However if you want the better volcano disaster film, watch Dante's Peak instead. Volcano is a decent, entertaining film, but it could have been a much better film as well. I think that the plot was good, but needed to be a bit more developed; luckily the cast saves it from a total mess. A decent film to watch, but nothing ever great.

The idea of volcano destroying the city was great. But representing the idea wasn't that great. Some of the scenes seemed a bit weird to me: Why was Kelly Roark (Gaby Hoffmann) was still standing when the lava was coming straight towards her? I mean any person who have common sense would try to run away from it, right? Okay I do get it that the story line tells us that she will have to be in that place where the lava will attack in the end. But they should have think of some other ideas to get her injured instead of that. Another scene that caught my eyes was: How could Dr. Amy Barnes (Anne Heche) saw Mike Roark (Tommy Lee) from being so far? No matter how serious it seemed, I laughed at that part. It's like her eyes were working as binocular. I think this movie was okay. Watchable.