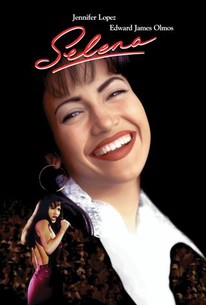 Critics Consensus: Selena occasionally struggles to tell its subject's story with depth or perspective, but those flaws are rendered largely irrelevant by Jennifer Lopez in the title role.

Critics Consensus: Selena occasionally struggles to tell its subject's story with depth or perspective, but those flaws are rendered largely irrelevant by Jennifer Lopez in the title role.

Critic Consensus: Selena occasionally struggles to tell its subject's story with depth or perspective, but those flaws are rendered largely irrelevant by Jennifer Lopez in the title role.

Selena Quintanilla was a major figure in Tejano music, a Grammy-winning recording artist, a beloved star in the American Southwest and Mexico, and seemed poised to cross over into mainstream popularity on the U.S. pop charts when she was murdered on March 31, 1995 by the president of her fan club. Written and directed by Gregory Nava, this biopic concentrates on Selena's relationship with her family and her rise to fame, dealing only briefly with her tragic death. Abraham Quintanilla (Edward James Olmos) is a veteran musician who leads a family-based singing group, The Dinos. At a young age, he notices that his daughter Selena (played as a child by Becky Lee Meza) has a strong singing voice, and he works her into the act (her big number is a version of Over the Rainbow). However, as she grows older, Selena (played as an adult by Jennifer Lopez) wants to establish her own musical identity; while her heritage is Mexican-American, her primary language is English, and her favorite artists are American pop acts like Donna Summer. While Selena and Abraham sometimes argue about the musical direction of the group, he always respects and supports her talent, and her blend of Tejano roots music and danceable pop rhythms soon sparks a revolution in Latin music. Selena later earns the wrath of her father when she becomes romantically involved with Chris Perez (Jon Seda), a rebellious and long-haired guitarist hired to play with the group, but when they elope and Selena convinces Abraham that their love is sincere, Chris is welcomed into the family. After a long string of successes on the Latin charts and playing to a sellout crowd at the Houston Astrodome and a crowd of 100,000 at a stadium in Monterey, Mexico, Selena begins recording her first album in English, which is expected to make her a mainstream star on the level of Whitney Houston or Gloria Estefan. However, the fates decreed it was an album she would never complete. Selena was produced with the participation of the Quintanilla Family (Abraham was executive producer), and Selena's own recordings were used on the soundtrack. ~ Mark Deming, Rovi

Pete Astudillo
as Himself

It tries to satisfy too many different groups at once and ends up watering down the art so much it satisfies no one.

Gregory Nava's 1997 biopic about the Mexican-American pop star Selena Quintanilla Perez... is typical of the genre's excesses, but I enjoyed quite a bit of it, in large part because of the energy and charisma of Jennifer Lopez in the title role.

What makes this movie work is Jennifer Lopez's electric performance as Selena, capturing the charismatic aspects of Selena's stage persona and the essence of her maturity as a growing woman.

When it doesn't, however - when Selena teeters precariously in the direction of hagiography and buckles under the weight of representing all Latinas to all people - then the real young woman herself is hard to find.

... Lopez's presence and ability made her seem just one role away from stardom, and with "Selena" she's seized the opportunity and turned in an incandescent presentation that is especially strong during the film's numerous musical numbers.

At its best, "Selena" suggests why so many people reacted with such great heartbreak to her death.

It's hard to get too cynical about the approach taken by Selena.

J-Lo does a phenomenal job...but I want to see the real Selena story, not one written by her parents...

The last five minutes are amazing...J-Lo looked great, the acting is solid, it's just a bit too long...

Jennifer Lopez ... elevates the film immensely with her radiant and energetic performance.

A well-meaning but bland and shallow salute to Selena.

Even if you have never listened to her music, you will still appreciate this film.

Heartbreaking! A must see!

The story of a girl who had the spirit to believe in a dream and the courage to make it come true.

One of the better biographical movies in my book. J-Lo was great in this.