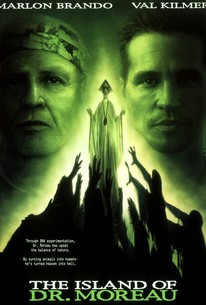 Critics Consensus: Timid and unfocused in its storytelling, The Island Of Dr. Moreau is more lackluster misfire than morbid curiosity.

Critics Consensus: Timid and unfocused in its storytelling, The Island Of Dr. Moreau is more lackluster misfire than morbid curiosity.

Critic Consensus: Timid and unfocused in its storytelling, The Island Of Dr. Moreau is more lackluster misfire than morbid curiosity.

The Island of Dr. Moreau Photos

This is the third movie to bring parts of early 20th-century writer H.G. Wells' book The Island of Dr. Moreau to the screen. Earlier versions (1933, 1977) adhered more closely to the story than this one does. Douglas (David Thewlis) is a U.N. peace negotiator who is stranded in the middle of the Pacific Ocean by an airplane crash. He is picked out of the water by Montgomery (Val Kilmer), Dr. Moreau's assistant, and taken to a tropical island. He is at first prevented from straying much beyond the doctor's house and is befriended by Dr. Moreau's daughter (Fairuza Balk). Gradually he discovers that Dr. Moreau (Marlon Brando) has been mixing human and animal genes to create chimeras intended to serve the human race as slaves. The chimeras are not content to serve, however, and the situation unravels from there. One of the film's many lowlights is Ron Perlman as Sayer of the Law in a send-up of Charleton Heston's Moses. Brando and Balk manage to give interesting performances, but for the most part the film is a tedious and unpleasant exercise overwhelmed by garish make-up and animal costuming.

Ron Perlman
as Sayer Of The Law

Kitty Silver
as Sow Lady No. 1

Fiona Mahl
as Sow Lady No. 2

Ron Vreeken
as Soldier No. 1

Lou Horvath
as Soldier No. 2

David Rigney
as Hyena-Swine
View All

Critic Reviews for The Island of Dr. Moreau

Brando's performance is enormous fun, but it's not just a joke. He's hilarious and gently mesmerizing at once, and director John Frankenheimer savvily adjusts the tone of his movie to fit Brando's daft brilliance.

The movie keeps switching focus without ever getting its bearings, and when Brando exits earlier than expected, there's little but mayhem to fall back on.

Roughly akin to watching a slow-motion train wreck in which the flames spread into the brush and become an out-of-control wildfire. What the hell happened?

It's not to say there's not a lot wrong with the film, but rather to suggest that the chief criticisms of it being strange and "a mess" aren't among them.

An often fascinating mess, but a mess all the same.

In its final third, the movie goes to hell in more ways than Frankenheimer intended.

The most exciting characters are killed off too early, and what we're left with is a Satan's "Seasme Street."

I'm sure it looked good on paper. That and Kilmer's frighteningly apt mimicry of Brando's voice are about the only positive things I can say.

Audience Reviews for The Island of Dr. Moreau

I genuinely can't begin to describe how bizarre this movie is. I almost recommend it just for people to see how bad movies can get.

Brando and Kilmer are both totally off their rockers in this. Kudos to Frankenheimer for just finishing this flawed, but slightly interesting film. Stan Winston's make up is also incredible.

On a remote ISLAND in the South Pacific, the balance OF nature has been upset by the experiments of DR. MOREAU... with the key of science he's unlocked the gates of hell.

The Island of Dr. Moreau Quotes