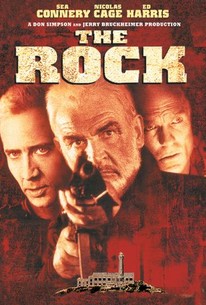 Critics Consensus: For visceral thrills, it can't be beat. Just don't expect The Rock to engage your brain.

Critics Consensus: For visceral thrills, it can't be beat. Just don't expect The Rock to engage your brain.

Critic Consensus: For visceral thrills, it can't be beat. Just don't expect The Rock to engage your brain.

The sophomore film from former music video and commercial director Michael Bay, this fast-paced action yarn featured rapid-fire editing, a cutting-edge rock soundtrack and liberal use of shots awash in a haze of burnished hues, all trademarks of producers Don Simpson and Jerry Bruckheimer. Nicolas Cage stars as Stanley Goodspeed, an FBI chemical weapons expert handed a unique assignment. Francis X. Hummel (Ed Harris), an insane Marine Corps general, has taken 81 tourists hostage on the abandoned island prison of Alcatraz. He and his men are threatening to bomb San Francisco with deadly gas unless $100 million is paid in war reparations to the families of servicemen killed in covert operations. Goodspeed is teamed with former British spy John Patrick Mason (Sean Connery), the only man ever to escape "The Rock," as well as a Navy SEAL team. When their military escorts are ambushed, it's up to odd couple Goodspeed and Mason to break into Alcatraz and stop Hummel. The Rock was the last film produced by Simpson, who died of a drug overdose before the film's release. Solo, his partner Bruckheimer continued making the sort of glossy, frenetic films for which the duo was famed. ~ Karl Williams, Rovi

Jack Yates
as Hummel Marine `A'

Juan A. Riojas
as Hummel Marine `B'

Ingo Neuhaus
as Marine That Dies

Sean Skelton
as Kid on Motorcycle

Buck Kartalian
as Reverend
View All

News & Interviews for The Rock

View All The Rock News

Critic Reviews for The Rock

There isn't a shot, scene or sequence in The Rock that doesn't move furiously, typically with colored lights flashing into our faces or onto those of the actors.

You might need to take Dramamine before entering a Michael Bay movie. The one-time music-video director has an annoying habit of finding the tightest shots, editing the heck out of them and scoring the works to loud music.

For action-adventure fans, it just doesn't get any better than The Rock.

Since the plot is ridiculous, The Rock works best when it's most light-hearted.

If it's not the most awful thing I've ever seen, it's close enough to make me wince.

The borrowings from other movies, going all the way back to the car chase in 1968's Bullitt, are heavy. But Bay has three leads to lend weight and dimension to characters who are hardly original and flatly written.

The Rock is far from the worst movie that Bay's made, but given its roster of impressive performers and promising opening hour, it might just the ADD-afflicted filmmaker's most disappointing.

Connery and Cage are a compelling team and redeem the film from ruin despite the mechanical plot, an excessive body count and a miraculous recovery (you'll know it when you see it).

The movie's best asset is the old-fashioned, buddy-movie interplay between Cage and Connery - Cage as the frantic, white-collar lab technician who doesn't like guns, Connery as the weathered, resourceful old pro.

Neither as cartoonish as Con Air, nor as sentimental as Armageddon, this most satisfying of blockbuster movies deserves further kudos for establishing Nicolas Cage as one of Hollywood's unlikeliest action heroes.

As relentlessly dumb and implausible as the Die Hard movies but even more entertaining, this loud and violent action film profits greatly from the galvanizing presence of Connery.

The filmmakers got suckered by their own high-tech effects, turning a potentially clever entertainment into yet another barrage of violence, vulgarity, and excess.

Audience Reviews for The Rock

A thrilling and explosive film led by a trio of fantastic actors (especially Cage) and surprisingly well directed for a Michael Bay movie, and it also impresses with the way that the smart script introduces many narrative elements which turn out to play an important role later on.

The pace is too fast to stop and think about the ridiculousness of this film and this summer blockbuster extraordinaire pulls you in.

Michael Bay's second feature film and his best. The film demonstrates everything that was exhilarating about 90's action flicks. The film is full of exciting gun fights, a great car chase in the middle of San Francisco, and explosions. When Michael Bay blows things up, he blows them up good. Despite the film's overall silly premise, the actors make it believable. The three main leads give fantastic performances. Nicolas Cage is funny, and Ed Harris gives a surprising amount of depth to his character. The guy that steals the show however, is Sean Connery. Every line that comes out of his mouth, is priceless. Michael Bay sets out to make fun popcorn flicks and in this instance, he succeeds with flying colors.

Michael Bay is in top form, as he directs a clever blend of storytelling and action and finally finds a great balance between the two. "The Rock" is a hard hitting action flick, that also serves as being very meaningful with it's subtle moments with Sean Connery, for being the only man to ever escape Alcatraz. He works with Stanley (Nicholas Cage) to bring down a man who is holding a group of tourists hostage in Alcatraz. This film does try a little too hard to be smart, which leaves it still having the cheesiness of any other bay flick; However, the tone is gorgeous, the soundtrack it riveting, the acting is decent but sometimes over-the-top, and the action is awesome. Overall, the film is not Bay's best flick, but it ranks very high in his best attempts. The Rock is a very solid film!