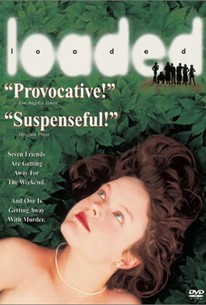 A group of six British youths must deal with the accidental death of one of their members during a weekend outing in this British drama. The main character is Neil who goes to meet his buddies at a country house to make a film. Included in the group are Rose, his girlfriend, Zita, a strong, young black woman, Giles who is into psychopaths, Lance and his girlfriend Charlotte, and finally Lionel who wants this film to be his calling card into the world of cinema. Things are fine until, after dropping some acid, Neil and Lance accidentally run over Lionel on their way to get cigarettes. The group decides to bury the body in the forest. ~ Sandra Brennan, Rovi

Tom Welsh
as Skinhead
View All

It has a probing curiosity that cuts through the formulaic certainties of most movies about youth.

A quintessential indie navel-gaze that scans like Deliverance for blotter-chewing Londonites.

There are no featured audience reviews yet. Click the link below to see what others say about Loaded!