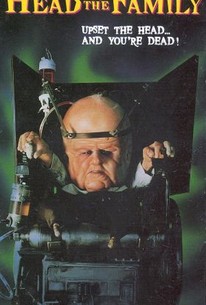 This well-written, entertainingly tasteless tongue-in-cheek horror film from Full Moon Pictures concerns Lance (Blake Bailey) a wimpy diner owner who is being shaken down by a crass, loutish biker named Howie (Gordon Jennison). Lance and Howie's wife Loretta (Jacqueline Lovell) are having an affair on the side and want to get rid of Howie for good. The opportunity presents itself when, on their way home from a Lover's Lane tryst, they notice a strategically placed detour sign leading to the Stackpoole house. It turns out that the Stackpooles are a family of quadruplet freaks, with three of them telepathically ruled by the fourth. Retarded Otis (Bob Schott) is the muscle; bug-eyed Wheeler (James Jones) is the eyes and ears; gorgeous Ernestine (Dianne Colazzo) is the seductress; and Myron (J.W. Perra) -- a giant head strapped to a wheelchair -- is the "brains" of the operation. Myron wants to be more than just a talking head, so he waylays passersby and does brain experiments on them, keeping the lobotomized zombies in a basement dungeon. The best thing about the film is its appealing young cast, led by Lovell, who has great comic timing and funny delivery to go along with her oft-displayed body. As Myron, Perra's dry, ornery style is a perfect antidote to the usual over-the-top silliness of many similar villains. Benjamin Carr's script is delightfully (and surprisingly) sleazy, lending the air of a good old-fashioned 42nd Street grindhouse film to the proceedings. A sick treat for fans of unusual horror, Head of the Family is a worthwhile rental.

Christopher Bergschneider
as Freak
View All

Critic Reviews for Head of the Family

There are no critic reviews yet for Head of the Family. Keep checking Rotten Tomatoes for updates!

Audience Reviews for Head of the Family

Pretty fun cast and story. Great old skool makeup effects and b movie dialog. Doesn't take itself seriously and fits in up there with Jeffery Combs type greatness.

Head of the Family Quotes