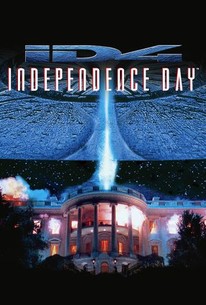 Critics Consensus: The plot is thin and so is character development, but as a thrilling, spectacle-filled summer movie, Independence Day delivers.

Critics Consensus: The plot is thin and so is character development, but as a thrilling, spectacle-filled summer movie, Independence Day delivers.

Critic Consensus: The plot is thin and so is character development, but as a thrilling, spectacle-filled summer movie, Independence Day delivers.

A group of intrepid humans attempts to save the Earth from vicious extraterrestrials in this extremely popular science-fiction adventure. Borrowing liberally from War of the Worlds, Aliens, and every sci-fi invasion film inbetween, director Roland Emmerich and producer and co-writer Dean Devlin present a visually slick, fast-paced adventure filled with expensive special effects and large-scale action sequences. The story begins with the approach of a series of massive spaceships, which many on Earth greet with open arms, looking forward to the first contact with alien life. Unfortunately, these extraterrestrials have not come in peace, and they unleash powerful weapons that destroy most of the world's major cities. Thrown into chaos, the survivors struggle to band together and put up a last-ditch resistance in order to save the human race. As this is a Hollywood film, this effort is led by a group of scrappy Americans, including a computer genius who had foreseen the alien's evil intent (Jeff Goldblum), a hot-shot jet pilot (Will Smith), and the President of the United States (Bill Pullman). While some critics objected to the film's lack of originality and lapses in logic, the combination of grand visual spectacle and crowd-pleasing storytelling proved irresistible to audiences, resulting in an international smash hit. ~ Judd Blaise, Rovi

Will Smith
as Capt. Steven Hiller

Vivica A. Fox
as Jasmine Dubrow

Leland Orser
as Tech/Med. Asst. No. 1

Vivian Palermo
as Tech/Med. Asst. No. 2

James Wong
as SETI Tech One

Robert Pine
as Chief of Staff

Marisa Morell
as Co-Worker No. 2

Michael Winther
as Co-Worker No. 3

Dexter Warren
as Co-Worker No. 4

Paul LeClair
as Co-Worker No. 5

Jeff Phillips
as B-2 Pilot
View All

A sci-fi story constellation of the brightest star elements. With German director Emmerich at the helm, Independence Day soars as filmic uber-craft.

Sonnenfeld has directed with gusto and precision from a vaguely plotted but often hilarious screenplay, and his view of Manhattan as a holding pen for intergalactic refugees has the touch of authentic experience fundamental to all great comedy.

"ID4" presses all the current hot buttons with great efficiency which will make it hard to keep in mind that just because a movie kicks major butt doesn't mean it's good.

It may be film-making by numbers, but the numbers are the right ones, and they fall into place with a satisfying clunk. This is everything a blockbuster should be.

It's the first futuristic disaster movie that's as cute as a button. Which, when all the special effects blow over, is what we Americans like in a monster hit.

Independence Day isn't perfect but the film is still fun to take in on a hot summer night.

But what if that's just masking everything that we're afraid to admit? What if we were manipulated into liking this movie, and we've been blind to it all this time?

Never professes to be anything more than escapist entertainment, with enough "gee whiz" pyrotechnics to enthrall audiences.

I think what's great about this is the re-watchability factor of it, you can put it on at any time, watch it, have a great time with it, and show it to other generations.

Raj Rawal
What the Flick?!

It's an utter slog, and there's nothing worse to say about a movie whose entire, solitary purpose in life is to provide mindless, violent escapism.

One of the best summer blockbusters ever made...

Good film. A bit too unrealistic for my taste but good enough.

Will Smith and hostile aliens???
What more can I say about one of the best action flicks of 1996.

Devlin and Emmerich are hardly known for their sophistication and subtlety, and this big budget B-movie certainly won't change any minds on that score. It follows the summer blockbuster formula to the letter, but it is done with enough tongue in cheek humour to make it a hugely enjoyable experience. The action is all very gung-ho and flag waving (I'm still not sure if the president's "Independence Day" speech is meant to be taken seriously, but it always raises a laugh from me!) but thrillingly done; the dogfight through a canyon is as exciting as Hollywood action gets, and you can't help but cheer for Randy Quaid's boozy abductee in the climactic battle. Jeff Goldblum is at his least irritating and has some fantastic banter with his crotchety Jewish father played to perfection by veteran comic Judd Hirsch. The characters are all walking cliches and the characterisation just a load of soapy melodrama but it's little more than mercifully brief window dressing for the rollercoaster ride of the alien invasion. The ground breaking effects still look good today and it's great entertainment if you don't take it too seriously; big, dumb and a lot of fun.