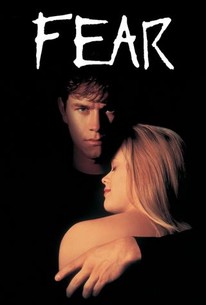 Critics Consensus: Fear has an appealing young cast, but their efforts aren't enough to consistently distract from an increasingly overblown - and illogical - teen stalker story.

Critics Consensus: Fear has an appealing young cast, but their efforts aren't enough to consistently distract from an increasingly overblown - and illogical - teen stalker story.

Critic Consensus: Fear has an appealing young cast, but their efforts aren't enough to consistently distract from an increasingly overblown - and illogical - teen stalker story.

Mark Wahlberg stars in one of his first features as a hoodlum drug dealer from the wrong side of the trackswho falls in love with Nicole Walker, an upper-middle-class high school girl (Reese Witherspoon). In this psycho-drama (with the emphasis on psycho), Nicole happily loses her virginity to her first love, but, when she begins to doubt the relationship, his tenderness turns to violence, as he stalks and terrorizes her and her friends and family. The girl's father never trusted him in the first place, but his reservations about his daughter's first serious boyfriend are interpreted as Oedipal paranoia, until the boy and his drug-dealing, date-raping buddies besiege the overly fortified house in a twisted attempt to win back Nicole's love. The Seattle setting juxtaposes a grunge rock underworld with an over-privileged suburban household, and includes a very sexual ride on a roller-coaster. And yes, former underwear model Wahlberg appears shirtless several times. ~ Laura Abraham, Rovi

Will Sengotta
as Kid at Door

For a while, the cast is appealing enough, and the design is House Beautiful enough, to camouflage the Fatal flaws that turn the second half into an overblown, predictable snicker-fest.

If there isn't room for a big, dopey teen thriller in your movie-watching life, then the only thing you have to fear is Fear itself.

It's well-paced, a little crazy and creepy, but that's how it built up the character and the tension...

It's not great. An interesting way to spend an hour-and-a-half, that's for sure. The performances were fine, but it was so twisted.

Below its surface, Fear is focused on how damaging the protective nature of fathers can become when young women are treated as property.

One of the all-time goofiest movies, avoiding a tough inspection of troubling emotional speeds and stunted communication to sneeze out a confused, half-realized story of obsession.

A throwback to the psycho-sexual thrillers of the 1980s, Fear is sort of a male version of Fatal Attraction

Though cheesy and illogical, this thriller has charming performances, and an exciting climax.

Corny but cool...Wahlberg has presence

Good thriller, and the movie that introduced me to Reese Witherspoon. Still enjoy it many years later. How did I only just notice David has a Chucky doll in his room!

The decent right-side-of-the-tracks family unit is threatened by local not-so-right-side thug types in this thriller that borrows extensively from Peckinpah's "Straw Dogs" (1971). Wahlberg and Peterson do well as the tension mounts for the big winner-takes-all showdown but the final payoff's a trifle abrupt.

The first hour is nothing to get worked up about, which is why I can't give this a particularly high rating. But do not despair - the ending is sure worth the wait! Reese Witherspoon's character Nicole can sometimes be downright painfully gullible and naïve when it comes to all the crap David is shoving down her throat, but hey, let's be honest here: some teen girls really are.

Laura: What's the big deal? Steve: The big deal, Laura, is that the guy gives me the creeps, and the girl is my daughter. The only way to describe Fear is it's a not so thrilling thriller. It's unoriginal and really offers nothing but what you'd expect. Nicole(Reese Witherspoon) starts dating a seemingly nice guy, David(Mark Wahlberg). Soon her family and eventually her comet to see that he isn't the nice guy he appears to be. Both Witherspoon's and Wahlberg's acting are suspect. This is an early role for both. I normally like Wahlberg, but he just wasn't at all convincing in his psycho role. I can take or leave Witherspoon. Some times she really impresses me and other times she doesn't. This is one of those where she doesn't. Overall I guess it's entertaining enough to hold your attention for awhile, but don't expect anything above average here. David: Hey Mr. Walka!