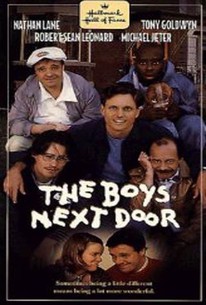 The Boys Next Door Photos

This made-for-television Hallmark Hall of Fame presentation is based on the play of the same name by Tom Griffin. Nathan Lane, Robert Sean Leonard, Michael Jeter, and Courtney P. Vance star as four men with various mental challenges who try to carve out lives for themselves as they share a home under the guidance of a social worker (Tony Goldwyn). Mare Winningham was nominated for an Emmy Award for her co-starring role.

Critic Reviews for The Boys Next Door

There are no critic reviews yet for The Boys Next Door. Keep checking Rotten Tomatoes for updates!

Audience Reviews for The Boys Next Door

Very cheesy and dated. Good performaces, but more like "after school special" than "film I would take seriously".

The Boys Next Door Quotes