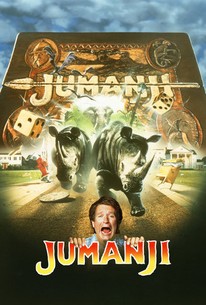 Critics Consensus: A feast for the eyes with a somewhat malnourished plot, Jumanji is an underachieving adventure that still offers a decent amount of fun for the whole family.

Critics Consensus: A feast for the eyes with a somewhat malnourished plot, Jumanji is an underachieving adventure that still offers a decent amount of fun for the whole family.

Critic Consensus: A feast for the eyes with a somewhat malnourished plot, Jumanji is an underachieving adventure that still offers a decent amount of fun for the whole family.

When young Alan Parrish discovers a mysterious board game, he doesn't realize its unimaginable powers, until he is magically transported before the startled eyes of his friend, Sarah, into the untamed jungles of JUMANJI! There he remains for 26 years until he is freed from the game's spell by two unsuspecting children. Now a grown man, Alan reunites with Sarah and together with Judy and Peter tries to outwit the game's powerful forces in this imaginative adventure that combines breathtaking special effects with an enchanting mixture of comedy, magic and thrills.

Frederick Richardson
as Barber
View All

The humans are wooden, the computer-animals have that floating, jerky gait of animated fauna.

Take away the CGI mayhem and what emerges is a rather touching tale of second chances and innocence prematurely lost.

Dwayne Johnson is a jungle VIP in this entertaining sequel to the much-loved Robin Williams caper.

It was totally one of those 90's movies specifically made for 90's kids.

Filmmaker Joe Johnston has infused Jumanji with an appreciatively old-school feel that's reflected in its many attributes...

The joy of Jumanji is in how sparingly director Joe Johnston deploys his arsenal of computers, making the tricks and shocks the more real.

Some thrills, but may be too much for little ones.

Like the rest of Johnston's oeuvre, Jumanji puts vivid characters through paces that will quicken any child's pulse.

This smart, scary film, is still a favorite to dust off and take from the "vhs" bin

All the effects in the world can't disguise the thin plot.

The special effects and make-up are atrocious, and this excruciating movie wants us to care about a silly game that has nothing compelling or adventurous about it and whose rules seem ridiculously arbitrary - and it all ends in an awfully sentimental conclusion.

Probably the one movie every kid in the 90's had or wanted to see.

"Jumanji has always been one of those films that are just a lot of mindless fun to watch. I have watched this movie more times then I would like to admit. But it is one of my favorites from my childhood. But I still love it as much as an adult then I did as a kid. Robin Williams will always be a huge favorite of mine. Bonnie Hunt is funny and I miss her in movies. The movie is great for all ages to enjoy. So if you get a chance, see it with your kids, or see it by yourself. Either way you can't come from this movie not liking it. I'll probably see it at least a dozen more times before the year is over with lol."

Surprising winner here which hits all the targets really well, its fun, exciting, well acted and looks good. Surprising because I recall this coming out and the trailer looked pretty dumb really, lots of CGI and not much else really, the effects were pretty special back then, I guess that was the hook. But blow me there was actually a really good story in there too. There's an original fantasy or dream like quality in this that you only found in Disney classics of yester years but its captured so well here, a modern 'Bedknobs n Broomsticks' if you will. All the cast are likeable and the jungle aspect really works well, you never see it, just hinted at which is just right, teasing you but not going overboard. The backstory and ending of the film are really well done too, could of gone on with more 'plays' from the game as there has obviously been previous adventures, but its open ended and adds mystery to the whole idea. Quite a modern kids classic really with solid work from the crazy and youthful Williams who adds nice emotion to some scenes, he is a good kids film actor.