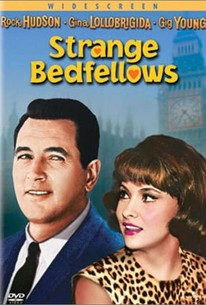 This romantic comedy stars Rock Hudson as Carter Harrison, an executive rising through the ranks of a major oil company. When he meets Toni Vincente (Gina Lollobrigida), a beautiful but hot-tempered artist, it's love at first sight and they quickly marry. The bloom is soon off the rose, however, and, five years later, Carter and Toni are about to finalize their divorce. However, just as the final paperwork is about to go through, Carter learns that he's up for a major promotion which would hinge on his being married. Carter is able to engineer a reconciliation with Toni with the help of his friend Richard Bramwell (Gig Young), a PR agent with the firm who hopes that a happy marriage will improve Carter's reputation. Since his separation from Toni, Carter has become known as something of a lothario, a reputation that the family-oriented company would like to avoid. But even though the couple patches things up, Richard has his work cut out for him when Toni announces that she'll be reenacting Lady Godiva's naked ride as part of a protest organized by an artists' group.

Maurice Dallimore
as Gentleman in Rain

Kanan Awni
as Sheik
View All

Raquel Stecher
Out of the Past
View All Critic Reviews (1)

There are no featured audience reviews yet. Click the link below to see what others say about Strange Bedfellows!