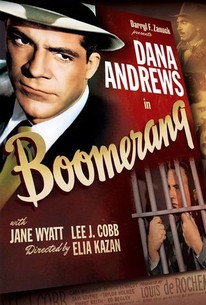 Filmed as if it were a documentary, this gripping film noir was considered a shocker in its day because it centered on the murder of a priest and for its presentation of the corruption and illicit shenanigans that can be found in a "typical" American small town. It was also one of the first films of its kind to leave the murder formally unsolved and is based on the true story of a murder and trial that occurred in early 1924 in Bridgeport Connecticut. The grim tale begins as an aged priest pauses beneath a street lamp to puff on his pipe. Without warning someone pulls a gun and shoots him in the back of the head in front of a crowd. The police soon arrest a transient and accuse him of the brutal killing. The vagrant, who hadn't slept in days and who was on the brink of starvation confesses. The ambitious states attorney is to prosecute him, but, despite the insistence of his higher-ups who desperately want a scapegoat to soothe the public outrage, his investigation turns up inconclusive evidence. Even testimony from "reliable witnesses" does not fully convince him that the tramp is really guilty. The attorney begins investigating more deeply on his own. Much to the surprise of every one involved and to the detriment of his career, the prosecutor abruptly changes sides and begins defending the transient. He then proceeds to demolish the new prosecutor's case in court and in the end risks his own life to prove that the hobo could not have killed the priest. The story was filmed in the real office, jail cells and courtroom of Stamford, Connecticut. Producer de Rochemont who pioneered the distinguished "March of Time" newsreels helped perfect the documentary style used in this drama.

Mayor Charles E. Moore
as Himself

Brian Keith
as Extra
View All

The unemphatic presentation of details, the use of locations, and strong performances from a largely non-professional supporting cast, lend the film authenticity and power.

Movie-makers should positively remember that a public story is a public trust.

This 1947 film is limited in scope and feeling, but the superficial dramatics work well enough.

A very good film, very in line with its director. [Full Review in Spanish]

...remains a taut, effective drama fascinating both for its technical acumen and for its disturbing prescience of the travails Kazan would face with HUAC in only five years.

... Kazan avoids the usual theatrics as Andrews, who loosens up a little under Kazan's direction, methodically works his way through his case with a modesty rare even in today's spate of TV legal dramas. It's more film gray than noir...

Though not one of Kazan's best films, Boomerang is perfectly watchable.

Kazan shot most of the film on location, using high-contrast cinematography and an extremely mobile camera to create a palpable sense of urgency.

A great cast and story, it's really dramatic and exciting, I loved it.

I'm teetering between 3 and 3 1/2 stars. I liked the essence more than I liked the premise of this politically motivated courtroom drama. Dana Andrews and Lee J Cobb are superb, as always, but the narration and structure is a little too heavy-handed for my taste.

Filmed on location in my current hometown - Stamford CT - yay! Good buildup about political shenanigans related to the prosecution of a mysterious murder in small town America is ultimately spoiled by a by third act courtroom scene where all is miraculously revealed. A compelling mix of documentary and noir styles in this early effort by Elia Kazan.

An honest district attourney is pressured into convicting a man accused of the murder of a priest, but when he examines the evidence, he has second thoughts as to the man's guilt. Rather similar to 12 Angry Men, which was released 10 years later and also featured Lee J. Cobb and Ed Begley, this is an intelligent courtroom drama based on a real case from the same director as Brando's On The Waterfront and Cat On A Hot Tin Roof. It shows not only the investigation of the evidence, but also the pressures behind the scenes from self-serving politicians, the press and a public eager for a quick conviction. Dana Andrews is solid as the crusading DA, but it is Cobb's worldly wise chief of police and Arthur Kennedy as the suspect railroaded into a false confession that are the stand-out performances. The true identity of the murderer is only hinted at, and he suffers a rather contrived timely come-uppance no doubt to appease the "crime doesn't pay" censorship laws, but otherwise a fine noir-style examination of the American justice system.