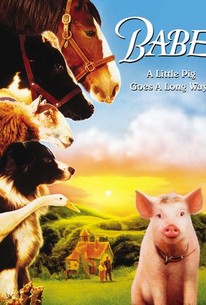 Critics Consensus: The rare family-friendly feature with a heart as big as its special effects budget, Babe offers timeless entertainment for viewers of all ages.

Critics Consensus: The rare family-friendly feature with a heart as big as its special effects budget, Babe offers timeless entertainment for viewers of all ages.

Critic Consensus: The rare family-friendly feature with a heart as big as its special effects budget, Babe offers timeless entertainment for viewers of all ages.

A young pig fights convention to become a sheep dog -- or, rather, sheep pig -- in this charming Australian family film, which became an unexpected international success due to superior special effects and an intelligent script. The title refers to the name bestowed on a piglet soon after his separation from his family, when he finds himself on a strange farm. Confused and sad, Babe is adopted by a friendly dog and slowly adjusts to his new home. Discovering that the fate of most pigs is the dinner table, Babe devotes himself to becoming a useful member of the farm by trying to learn how to herd sheep, despite the skepticism of the other animals and the kindly but conventional Farmer Hoggett (James Cromwell). Because technically impeccable animatronics and computer graphics allow the farm animals to converse easily among themselves, first-time director Chris Noonan can treat the film's menagerie as actual characters, playing scene not for cuteness but for real emotions. The result is often surprisingly touching, with Noonan and George Miller's script, based on Dick King-Smith's children's book and, indirectly, a true story, seamlessly combining gentle whimsy and sincere feeling. These same qualities are embodied by in Cromwell's beautifully understated performance as Farmer Hoggett, which anchors the film. Despite its unlikely premise and low profile, Babe's inspirational story was embraced by audiences and critics, and the movie became an international sleeper that won an Academy Award nomination for Best Picture. It was followed in 1999 by the less successful Babe: Pig in the City. ~ Judd Blaise, Rovi

Paul Goodard
as Son in Law

David Webb
as The Vet

Marshall Napier
as Chairman of Judges

Chris Noonan
as Babe
View All

Peter Rabbit and Three More Talking Animal Movies Your Kids Will Love
Finding Dory, The People v. O.J. Simpson, Superbad, and a Ton of James Bond Available to Stream on Netflix and Amazon Prime
Best-Reviewed Summer Blockbusters by Year Since 1975

Much to my surprise, I found Babe charming in an eccentric, oddly tough-minded sort of way. And if it isn't quite good enough to change my mind about the entire critter-chat genre, it is certainly good enough to recommend.

He's brave and bright, good-natured and ambitious, naive and vulnerable. All in all, he's probably the most winsome orphan to appear on the screen since Freddie Bartholomew impersonated David Copperfield 60 years ago.

Thanks to well-trained live animals, clever voice characterizations and a big dash of muppetry from Henson's Creature Shop, Babe and his barnyard friends not only walk the walk and trot the trot, they also talk the talk.

Here's the summer's sleeper for kids and their parents, a terrific picture that takes a lot of risks and makes them all pay off in a charming story about a pig who fancies himself a sheepdog -- or sheep-pig.

Babe is not, strictly speaking, a kid's movie. It is a preposterously funny fable that strikes a chord with adults, too.

For children, the movie will play like a storybook come to life. Adults, at first, will marvel at the special effects and puppetry. But ultimately, they'll be won over by the nuances of a story that finds a fresh way to deliver a timeless message.

Wise, captivating and thoroughly loony, this artful little farm fable is one of those rare films that works for all age levels.

The hero of the children's movie Babe is probably the summer's most likable character -- a pig so appealing he may have your family swearing off hot dogs.

The plot provides a worthy lesson for kids, but it plays out like George Orwell's Animal Farm as retold by Barney. Kinda weird.

It's a delight from start to finish that will captivate children and melt the heart of even the grumpiest adult.

The movie is at times raucous, but its spirits couldn't be higher, and the tale teaches a good-natured lesson about why cooperation is better than coercion.

This is a thoroughly charming movie. I saw it when it first came out and here it is, sixteen (can it be?) years later and having seen probably everything that Netflix has to offer ordered it as a "what the hey." I liked it better the second time. The movie teeters on the verge of sentimentality, but pulls back in plenty of time so there is no cringing! My favorite part of the movie is when the stoic farmer, nursing Babe who is sick with the thought that the farmer just wants to eat him, sings him a song, then--omigosh--does a highland dance. I don't think I've ever seen a more original declaration of interspecies love.

With a large targeted to the infantile audience, Babe obtain a nice effect to an older public with an intelligent screenplay, a good direction, just like the special effects and a simple language about dreams and friendship. Babe is a different tale that impress all for his humor and criative script. Fresh.

I loved Dick King Smith books, must've read a dozen of them as a kid. This movie was awesome when I was a kid--the farm animals were charmingly brought to life, and extra points for the loveable mice singing a beachy "If I Had Words"! It didn't quite stay true to the understated elegance of the book, but is still a classic in my heart.