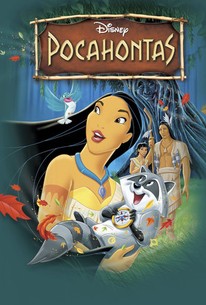 Critics Consensus: Pocahontas means well, and has moments of startling beauty, but it's largely a bland, uninspired effort, with uneven plotting and an unfortunate lack of fun.

Critics Consensus: Pocahontas means well, and has moments of startling beauty, but it's largely a bland, uninspired effort, with uneven plotting and an unfortunate lack of fun.

Critic Consensus: Pocahontas means well, and has moments of startling beauty, but it's largely a bland, uninspired effort, with uneven plotting and an unfortunate lack of fun.

History gets the Disney kiddie treatment and a politically correct interpretation in the studio's 33rd feature-length animated movie, the first to be based on actual events and people. Pocahontas (Irene Bedard) is the daughter of Algonquin chief Powhatan (Russell Means), who promises her in marriage to Kocoum, a brave whom she doesn't love. Pocahontas would rather be paddling in her canoe or wandering in the forest, communing with nature and her animal pals, Meeko, a raccoon, and the hummingbird Flit. When European settlers arrive, she becomes enamored of handsome John Smith (Mel Gibson). Their attraction is encouraged by Grandmother Willow (Linda Hunt), a talking tree. The situation between their peoples is tense, however, as the settlers, led by Governor Ratcliffe (David Ogden Stiers) desperately want the gold that they're sure the natives are concealing. When a dutiful sentry, Thomas (Christian Bale) follows Smith into the woods on one of his secret meetings with Pocahontas, a tragic mistake leads both groups to the brink of war. Only the love of Pocahontas and Smith can prevent bloodshed. Pocahontas (1995) was awarded two Oscars, for Best Original Musical or Comedy Score and Best Original Song for "Colors of the Wind." ~ Karl Williams, Rovi

The film may take you by surprise with its quick ending, running only 76 minutes before the credits roll. I wanted more both times I saw it.

Just about everything in this lavish, animated feature is for the pigtail set.

Overall this seems like a reasonable stab at an impossible agenda.

All Disney has really done in its disappointing 33rd animated feature is revive the stereotype of the Noble Savage.

The Disney artists have created a vivid palette for the picture.

This is a real woman's life. And now, the cultural event that is a Disney blockbuster has coopted that life.

It's just frustrating because they had an opportunity to take actual events and make them into a great movie.

Its comic characters are paltry; its villain is a bloated, harmless Captain Hook; and its story line is negligible as well as palpably silly.

It's hard to excuse the reconception of the eleven or twelve-year-old Pocahontas...as a statuesque supermodel, especially as kids don't need their stories to be hung on romance to deem them, err, shapely. [Blu-ray]

"Pocahontas" isn't an A-movie in the Disney catalog, but it's a solid second-tier film that, despite its romanticizing of the "noble savage," nonetheless features themes that are wholesome and consistent with Disney's messaging.

I do not share the negative criticism that this well-intentioned (yet naive) animation is racist and offensive to American Indians, and it is actually a lot more serious in theme and mood than the average Disney film, with also gorgeous visuals and a beautiful Oscar-winning song.

For the past two years, I've had a hankering to rewatch "Pocahontas" to see if my childhood love for it still stands, and despite its glaring historical inaccuracies with Pocahontas's and John Smith's love plot, boy does it truly hold up in terms of animation, score, and message. People are all praising millennial Disney princesses for not wanting to get married (Merida, Elsa, Anna), but they forget that 90s Disney heroines could be strong while still having love interests too. Mulan didn't want to get married at first; after fighting and winning the war, she sensibly invites Shang over for dinner. Pocahontas didn't want to get married at first; she falls in love with a perceived enemy but ultimately chooses to stay with her tribe. The bold hues and watercolor effects are still captivating; "Just Around the River Bend" and "Colors of the Wind" are still sweeping and mature orchestral masterpieces; and the themes of interpersonal peace, ecological sustainability, and cultural understanding are still relevant and moving. So freakin' good!

One of the most powerful films in the Disney collection, Pocahontas suffers from a weak villain and some throw-away characters, but features raw emotions and tension, a haunting, beautiful score, and some of the best songs ever written for film.

Pocahontas is one of the worst Disney films that I've seen. This was the end of an era as far as I'm concerned. The film was well drawn and had a good cast, but it just lacked the key ingredient that makes a Disney film so special. This film just feels like it was rushed and it just doesn't have anything memorable about. I really liked The Lion King, but this was such a disappointment. For me, it ranks as one of the most boring, uninspired Disney films. This could have been far better, but it failed to entertain me. This film feels uninspired and by Disney standards, it's a shame that they couldn't make a better film than this. This is a clichéd film that just doesn't succeed at pulling off what it tries to do. There are so many great Disney films, but Pocahontas just feels like the filmmakers took the easy way out by rehashing the same old ideas that have made Disney a brand name. By this point, you could tell that animated features were no longer the studios strong point, and as a result they would start to venture into more live action films. The Lion was a great film, this one, not at all, and then there was The Hunchback of Notre Dame, a decent flick, but nothing good or great. This film had potential in being a great little flick, unfortunately, it fails. If you want a terrific film about Pocahontas, watch The New World.