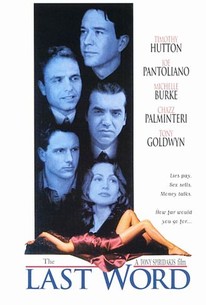 A reporter tries to balance his loyalty to friends with his personal integrity in this drama. Martin (Timothy Hutton) is a newspaperman from Detroit who has just published a book on organized crime. Doc (Joe Pantoliano), his close friend, has low-level connections to the Mob, and helped him get much of the information. While working on a story, Martin meets Sara (Michelle Burke), an exotic dancer with a complex story. He and Sara find themselves attracted to one another, and a romance grows between them, but Sara is angered when Martin uses deeply personal details of her story in one of his columns. After Martin promises Sara he'll never again betray her confidence, Doc approaches him with an offer -- a movie studio has expressed an interest in Martin's book, and Doc is having a cash-flow problem that's put him in debt to Mob loan sharks. Why not make Doc the producer on the movie so he can make some quick money and pay off the thugs? While Martin weighs the wisdom of this course of action, a studio chief tells Martin he's interested in his recent column about the stripper; if he can integrate the story into his book, they're certain to make a deal. The Last Word also stars Richard Dreyfuss, Chazz Palminteri, Cybill Shepherd, and Roma Downey.

Mark Neal
as Thug in Doorway

Andrea Fry
as Woman in Bookstore

Tim Pulice
as Man in Bookstore

Jon Dawson
as Baby
View All

There are no critic reviews yet for The Last Word. Keep checking Rotten Tomatoes for updates!

There are no featured reviews for The Last Word at this time.