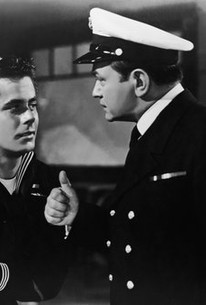 In this film, Edward G. Robinson portrays a hard-driving, hard-nosed perfectionist who causes dissension aboard a WWII destroyer. Coming aboard as a senior crewman, he drives himself as hard as he drives the younger generation of sailors he commands. However, Robinson proves himself a true hero during a major battle.

Though it offers no surprises, it's still well-done and mildly entertaining.

There are no featured reviews for Destroyer at this time.