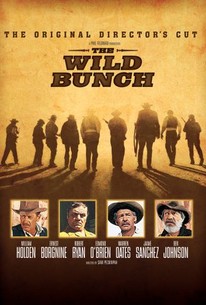 Critics Consensus: The Wild Bunch is Sam Peckinpah's shocking, violent ballad to an old world and a dying genre.

Critics Consensus: The Wild Bunch is Sam Peckinpah's shocking, violent ballad to an old world and a dying genre.

Critic Consensus: The Wild Bunch is Sam Peckinpah's shocking, violent ballad to an old world and a dying genre.

Sam Peckinpah's controversial revisionist Western takes place in Texas and Mexico in 1913, a transitional year when the Old West was giving way to the New West. The titular outlaw bunch, headed by ethical-in-his-fashion Pike (William Holden), continues staging violent bank robberies in their old, time-honored tradition. After a particularly brutal holdup in the town of San Rafael, the gang -- or what's left of it -- heads for the hills of Mexico, pursued by a posse led by Thornton (Robert Ryan), an old friend of Pike's. The gang discovers that the bank had been set up to be robbed by Thornton's railroad-executive boss Pat Harrigan (Albert Dekker), and that their booty consists of worthless metal washers. Meanwhile, the conscience-stricken Thornton seethes over Harrigan's scheme, which has cost too many innocent lives, but he is powerless to leave the railroad baron's employ lest he be sent back to jail. While hiding out in a Mexican village, the gang is engaged by corrupt general Emilio Fernandez to steal a huge shipment of guns from the U.S. Army. Like Thornton, Pike agrees against his will: his right-hand man Jaime Sanchez is being held hostage by Fernandez, who in turn is being manipulated by a pair of war-mongering German officers. More violence -- both justified and gratuitous -- follows, leading to a final blood-spattered confrontation between the Wild Bunch and 's posse. For many years, no one audience was privy to a "definitive" version of The Wild Bunch. Peckinpah's 144-minute director's cut was butchered by Warner Bros. after its first press showing (curiously, the studio removed not only the gorier scenes, but also several motivational sequences, rendering much of the film incomprehensible). The 1981 reissue was restored to 141 minutes, but it wasn't until the advent of home video that the complete version was once more made available. Once considered the last word in cinematic bloodletting, The Wild Bunch is a model of decorum compared to what was to follow.

Margarito Luna
as Luna
View All

News & Interviews for The Wild Bunch

View All The Wild Bunch News

Critic Reviews for The Wild Bunch

If you must see The Wild Bunch, be sure to take along a barf bag.

Remains hugely impressive, both for its technical brilliance and the emotional ferocity of its themes: old age, friendship, betrayal and the struggle to retain some kind of cock-eyed code of honour in an increasingly cynical world.

Underneath the movie, which is set on the eve of World War I, there's an elegiac plangency that stays with you long after the shocks have worn off...The Wild Bunch still won't go down easy.

It's a traumatic poem of violence, with imagery as ambivalent as Goya's.

Arguably the strongest Hollywood movie of the 1960s -- a western that galvanizes the clichés of its dying genre with a shocking jolt of delirious carnage.

In an era when body-count films mirror the mounting body count offscreen, The Wild Bunch dissects death rather than glorifying it.

The film drives to its foregone conclusion with the sureness of an arrow.

The Wild Bunch is the last and indisputable epic story of the Western genre. [Full Review in Spanish]

There is an unpleasant feeling of expense, of enormous amounts of money being spent, tons of footage being shot in order to get one slow-motion instant that will stamp home Peckinpah's obsessive theme

My favorite western because of the staunch code of loyalty and ethics employed by men outside the law, and for the amazing mingling of eras - the Mexican civil war, Germans and early airplanes are all factors in small but haunting ways.

Peckinpah's work, immaculately framed and searingly edited, leads us to wonder whether film form is hopelessly, and inevitably, in thrall to brutality.

Peckinpah plaits simple strands into an intricate pattern of contradictions and moral ambiguities.

Audience Reviews for The Wild Bunch

In Peckinpah's view, the bad guys are really the good guys because at least they have a code of honor. The good guys are little more than thieving cur, deserving bloody eradication. Despite the spurious politics, still a mammoth film, a testosterone ballet of bullets, blood and booty.

Initially panned by the critics due to its graphic amount of violence, this is an explosive and unforgettable Western classic that depicts with brutal intensity the last breath of an era, when outlaw gunfighters were finally becoming obsolete for a new, modern generation.

Raw, intense, visceral and gritty are just some of the few words that describe Sam Peckinpah's The Wild Bunch, which ranks among the finest Westerns ever made. The film features an all star cast of talented actors who light up the screen in the classic film. Every actor brings something terrific to the screen that elevates the plot significantly. Under Peckinpah's kinetic direction, The Wild Bunch is an action packed Western that is one of the finest in the genre. Peckinpah, like Sergio Leone before him, helped shape the Western film in a way that was both brutal, yet beautiful. Peckinpah had a flair for crafting pictures that really raised the bar in the way violence was presented, and in doing so, he broke new ground in what you could do in the cinematic medium. Set near the end of the Old West, when the country is being modernized in first years of the 20th Century, the film follows a group of aging outlaws out for one last score. The story is simple, but it works to the film's advantage because it doesn't overcomplicate things, the film uses the performances to elevate the films story. The result is impressive and in turn The Wild Bunch is a superb and accomplished picture that ranks among the finest Westerns ever made. With a great cast at his disposal, Sam Peckinpah does what he does best, and that's to make a riveting, violent and highly thrilling picture that has all of the director's trademarks that has made his work standout. In terms of sheer entertainment, The Wild Bunch succeeds on every level, with memorable performances, tense, well executed action; this is a blistering Western that is ranks among the finest of the genre. Sam Peckinpah knew how to get the most out of a simple concept, and that's exactly the case with this movie. Highly engaging from start to finish, this is a thrilling picture that delivers on all fronts, and it's a movie made with that raised the bar of what you could do in the genre.

A tale of unfaltering masculinity in an era of change, Sam Peckinpah's 'The Wild Bunch' is a masterfully crafted deviation from the conventional western. Initially following the titular criminals as they rob, murder and brutalize a town for personal gain the film's protagonists are shown as unrelenting and cold-blooded, this is soon altered, however, and the film's theme of change (both politically and morally) is reflected by the audience's perception of the bunch as they are subjected to the benevolence and brotherhood prominent within them over the two and a half hour running time. Aesthetically 'TWB' adheres to the iconography common to the genre, dirty characters inhabit the beautiful landscapes and the fight between America and Mexico acts as a political backdrop, cementing the globalism of the film's ideologies in a realistic nature and adding a sense of authenticity to the plot. At its core 'The Wild Bunch' is quintessentially about camaraderie against all odds, and the thoughtful visual metaphors throughout, such as a scorpion being overwhelmed by red ants, do not seem out of place or overly obvious amongst the intrigue and action that keeps the film above entertaining throughout.