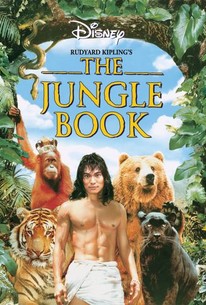 Critics Consensus: Rudyard Kipling's The Jungle Book may not hew as closely to the book as its title suggests, but it still offers an entertaining live-action take on a story best known in animated form.

Critics Consensus: Rudyard Kipling's The Jungle Book may not hew as closely to the book as its title suggests, but it still offers an entertaining live-action take on a story best known in animated form.

Critic Consensus: Rudyard Kipling's The Jungle Book may not hew as closely to the book as its title suggests, but it still offers an entertaining live-action take on a story best known in animated form.

This Disney live-action film contains elements of action, adventure, a nature film, and romance. It tells the story of Mowgli, an orphaned boy separated from his camp and childhood friend Kitty during an attack by Shere Khan the fierce tiger. The frightened child is raised in the Indian jungles by wolves and other animals. During a childhood swing through the trees, he finds a magical lost city brimming with treasure and swarming with apes. He grows up and encounters Kitty as she walks through the forest. He follows her to the city where she takes him under her wing to teach him civilized ways. Her fiance Boone grows jealous, learns of the treasure, and begins a plot to get rid of Mowgli after he leads them to the lost city. Boone and his henchmen end up kidnapping Kitty, her father, kindly Dr. Plumford, and Mowgli. The jungle boy leads on an exciting chase to the city. The scenes inside the city are reminiscent of the Indiana Jones movies. In the end, everyone gets exactly what they deserve.

Jungle Book entertains in a way both contemporary and traditional.

The new attempt - a live-action adaptation - is unlikely to supplant the cartoon version in anyone's affections.

That's the biggest problem with this Jungle Book. Sommers is so busy spinning his camera, crowding the soundtrack with animal noises and piling on the cheesy visual effects that he can't stop for a reflective moment or a character-revealing touch.

This Jungle Book, however, is more remindful of Disney's classic wildlife adventure pics than it is of a cartoon, and it is most remindful of that other jungle classic, Tarzan.

Rent the animated film instead.

A full-throttled, technically superb adventure - with more bite than most Disney live-action fare - that offers some winning moments but, ultimately, isn't as involving as it needs to be.

In the end, Rudyard's Kipling's The Jungle Book gains very little from this newest incarnation. As live-action fare, it has nothing on the 1942 version of the story that starred the Indian actor Sabu as Kipling's wild child.

This live-action rumble-in-the-jungle version of the story of Mowgli, the boy brought up to adulthood by wolves, may lack the songs and magic of the classic Disney feature-length cartoon, but it is closer to Kipling's original tale.

Frequently beautiful and with much to recommend it.

A great Remake but not as much great as the Original one.

It was actually a very fun adaption of the classic and quite memorable. It has a lot of beautiful looking sets and a lot of great sequences to match it. The acting was good and Stephen Sommers' style was a great addition to the film.

An okay adaption of a Disney classic. It's sometimes thrilling, other times dull, but the acting for the most part is good. Cary Elwes is especially memorable as the snarling villain.

Terrifc family adventure about a boy, Mowgli, a pure-hearted hero of the jungle who raised by animals. Both parents and their children should enjoy this lavish, smartly paced film.