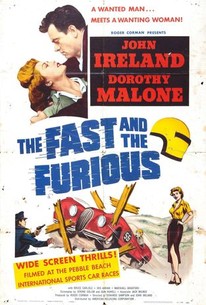 The Fast and the Furious Photos

Frank Webster (John Ireland) is a man on the run. Newly broken out of prison, the former truck driver and convicted murderer takes Connie Adair (Dorothy Malone) hostage at a lonely roadside diner and commandeers her car, a racing job than she intended to drive in a rally. At first Connie is as frightened as any woman should be in such a situation, but she soon sees that Frank is more than a wanted criminal -- he's an innocent man trying to redeem his life, and forced by circumstance to commit acts of violence. Soon the two are on the run together, lovers and fugitives using the cover of the road rally as a dodge so he can get to the border and freedom. Connie tries to convince Frank to take a stand, get the evidence out that framed him, and redeem his honor, as the authorities close in on the fast-driving pair. The second movie ever produced by Roger Corman, The Fast and the Furious marked the first release of Samuel Z. Arkoff and James H. Nicholson and the beginning of their American Releasing Corporation, soon to be renamed American International Pictures. ~ Bruce Eder, Rovi

News & Interviews for The Fast and the Furious

View All The Fast and the Furious News

Critic Reviews for The Fast and the Furious

Audience Reviews for The Fast and the Furious

Back in the mid-1950's, before anyone could guess that there'd be any kind of a market for films about driving fast Roger Corman and John Ireland produced this quickly assembled thrill ride about an escaped con and his hostage on the run ... in a smooth Jaguar XK120 (0 - 60 in 10.0 as tested, top speed of 126 mph, the fastest production car of its time). Dorothy Malone and Ireland are a good team and although the cars are old the action isn't. And many years later they would decide to bring back the old idea. ..

Not very fast nor terribly furious.

I don't know if the new "fast and furious" movies are anything like this one, I haven't seen them, but in my opinion this movie is really very cool. It was written by Corman, and you can tell it's sort of a cross between his later films and a film noir. It's exciting and I really enjoyed it.

The Fast and the Furious Quotes