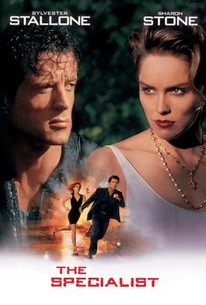 This over-the-top star vehicle for box office draws Sylvester Stallone and Sharon Stone went through a series of directors before landing in the hands of Luis Llosa. Stallone stars as Ray Quick, a former CIA bomb expert now retired in Miami after an operation against a South American drug lord went horribly wrong, resulting in the death of a child. Ray is coaxed out of retirement by May Munro (Stone) to help her get revenge on the powerful organized crime family -- headed up by Joe Leon (Rod Steiger) and his son Tomas (Eric Roberts) -- that killed her parents years before. In the meantime, Ray's former partner Ned Trent (James Woods) is on the Leon family payroll and is seeking his own kind of revenge on Ray. As Ray executes Leon's soldiers one by one, his attraction to May boils over into a steamy encounter in the shower, a prelude to an explosive finale. Although director Llosa wisely kept his camera focused on his buff, semi-clad stars and the film's spectacular effects, the somewhat silly and incoherent plot resulted in a poor box office performance for The Specialist, the third disappointment in a row for Stone.

Sharon Stone
as May Munro

Brittany Paige Bouck
as Young May

Cheito Quinonez
as Singer at Party

Yeniffer Behrens
as Schoolgirl on Bus

Steve Raulerson
as Chief of Police

Critic Reviews for The Specialist

This movie is a stinker in every way, from the one-dimensional acting to the idiot dialogue to the surprisingly monotonous storyline.

The Specialist is one of those films that forces the characters through torturous mazes of dialogue and action, to explain a plot that is so unlikely it's not worth the effort.

This movie is excruciatingly dumb.

With all the preening, posing and stretching, it's hard to know if The Specialist is an action movie or an exercise video.

This is film-making that never asks you seriously to believe, or care, but simply to wallow in its sensual overload and succumb to its trashy caress.

Nothing in it should surprise you, despite the twists the story attempts to take. Formula is formula.

Isn't Sly getting a little long in the Rocky-tooth for this kind of role?

A bizarre mix of explosions, histrionic acting and ridiculous plotting ... and it isn't pretty.

Ponderous, pretentious and acted with astounding indifference, The Specialist is a big fat bore with a couple of nice explosions. It's too somber to work as camp, and too tedious to work as anything else.

Audience Reviews for The Specialist

Not a great movie, but it's just too much fun not to enjoy on some level. You've got Sly as a bomb expert who finds a ton of different ways to blow you up. Sharon Stone adds to the mix mostly as eye candy, but she's actually a really good character too. Everyone else in the cast is pretty much star-studded as well, including Eric Roberts, Rod Steiger and James Woods. You pretty much know what type of movie it is before you put it in, so you'll either love it or hate it.

Sly ist the Best! The government taught him to kill. Now he's using his skills to help a woman seek revenge against the Miami underworld.

I liked this movie alot. Sylvester Stallone works very well in the action films that he stars in & this was one of them. Loved the scenes he did with Sharon Stone as well. Just a great movie! :) Love it no matter what critics or people say. :) Absoulutly a fave of mine. :) Will absolutly watch this movie again!!! Love it! :) Just a great movie, my dad even liked it lol. :) Sly rox!!!!! Can't wait to own it. :)

A very good action/thriller about a bomb specialist going after the mafia for revenge.