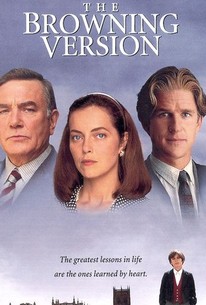 This British drama represents the second screen version of Terence Ratigan's play about a school teacher with a weak heart facing forced retirement. The first appeared 40 years ago. Andrew Crocker-Harris has been a rigorous teacher of Latin at a public school for the past 20 years. Because his heart condition warrants it looks as if he will be teaching English as a second language to foreigners. Andrew projects sternness, and the classical British stiff-upper lip. At school he is impeccably organized and disciplined, but at home, a different man appears. He is unhappily married to Laura. She is having an affair with Frank Hunter, the American chemistry teacher in the school. Hunter is uncomfortable with the relationship because he feels he is betraying his much admired colleague, Andrew. One student, Taplow, sees the sensitivity beneath Andrew's stern demeanor. Though he struggles, Taplow understands the beauty of the language Andrew tries to convey.

Mark Long
as Foster
View All

Critic Reviews for The Browning Version

The movie is civilized and literate, and Finney is suitably melancholy in the lead, but somehow there's a lack of fire and spirit.

The Browning Version is not only a very bad film, it desecrates a considerable work of art.

Not as good as the original, but Finney is magnificent.

The filmmakers lack the confidence to allow us the full measure of Rattigan's uniquely British sensibility.

Finney is terrific as a fussy teacher who picks up a few valuable lessons of his own.

High-class film about a middle-age teacher who does painful soul-searching.

Audience Reviews for The Browning Version