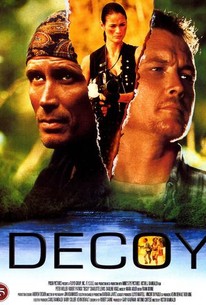 When a rival businessman (Scott Hylands) threatens his daughter Diana (Darlene Vogel), tycoon John Wellington (Peter Breck) hires Secret Serviceman Jack Travis (Robert Patrick) to protect her. In turn, Travis hires the eccentric mercenary Baxter (Peter Weller), also a former SS agent, to assist. It all seems simple enough at the beginning, but shortly after the bodyguards meet Diana they quickly find themselves in an increasingly complex and deadly situation in which almost no one is exactly who she or he seems to be.

Blaine Hart
as Spence
View All

There are no critic reviews yet for Decoy. Keep checking Rotten Tomatoes for updates!

There are no featured audience reviews yet. Click the link below to see what others say about Decoy!