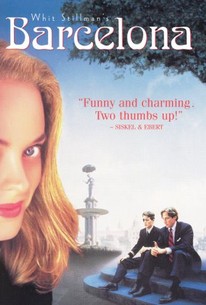 Whit Stillman's follow-up film to Metropolitan is a tart and chilly romantic comedy about Americans abroad during "the last decade of the cold war." Ted Boynton (Taylor Nichols) is an American salesman based in Barcelona with woman problems. Tired of having beautiful women reject him, he decides that plain women are more accessible and vows never to sleep with anyone again until he has found the right girl. Into his life appears his loud-mouthed cousin Fred (Chris Eigeman), an officer in the U.S. Navy. Fred announces a prolonged sojourn and Ted reluctantly takes him in. The two cousins don't hit is off at first but they settle in to a common interest --women. The two hit the town looking for available women --Ted hoping to find love and Fred looking for hot sex. Coming upon a group of beautiful "trade fair girls" the cousins manage to find a girl suitable for each of their needs.

An exquisitely composed yet fiercely combative satire (set in the eighties) of European mores as seen through the eyes of two young exemplars of the American establishment.

This is fairly amusing stuff-brittle, fresh, and impudent - if you can stomach all the upscale arrogance.

The prickly, conservative, jacket-and-tie iconoclasm of Barcelona is like nothing else around.

A remarkable find: The film doesn't stop at getting your attention, it rewards it.

Stillman's films tend to be about that magical moment when you realize people might actually start calling you on your s***.

Combines romance, comedy, philosophy and politics into one tantalizing package.

Oozes affection for its subjects, and that carries it through even the weaker character moments and the more jarring shifts of narrative and tone.

The unsympathetic characters and their slight adventure story was never compelling.

Darker and more acidic than Stillman's previous outing, this comedy, about two Americans at the end of the Cold War, could be described as Metropolitan meets Where the Boys Are meets The Year of Living Dangerously.

It's a shame that Stillman makes so few films. His talky feasts have attracted imitators and launched stardoms but films like this prove his originality.

Whit Stillman is like Woody Allen; if Woody Allen refused to make a film a year and really concentrated on saying something new with each film his makes. Don't get me wrong, I love Woody Allen but Whit Stillman has a handle over his craft that Allen can't seem to pin down. Stillman, like Allen, is all about social observation- delivering insights (and humor) into society through dialogue and situations "Barcelona" is a much larger step up from "Metropolitan" in terms of style, mood and execution. The film is darker and more confident. This helps the subtext remain pointed and mature and not as overly readable like in his previous feature. Stillman has this easy way of enveloping you into his films and "Barcelona" is a lovely yet acidic look into international social relations.

A dialogue-driven story about two Americans in Barcelona.